Vampires, monsters, clowns … some people hate ‘em, others crave the scare they offer. Especially when it comes to large-scale Halloween events like those within Universal Studios’ Halloween Horror Nights and the Los Angeles Haunted Hayride in Griffith Park, there’s a thin line between people who get absolutely shit-wrecked by the mere thought of masked people with chainsaws chasing after them and people who find a pleasurable thrill in the experience.

Although much smaller and less extensive than the two mentioned, UCR held several events of their own this Halloween season, including the Honors A-Mazing Event and the SRC Haunted House and Halloween Dance Party. It was a sudden desire for thrill (stemming from overactive adrenal glands and a general lack of experience with anything scary) that prompted me to visit both of these and compare the two … assuming I would get out alive.

Like any standard comparison, I had to come up with a scoring system that would encapsulate the quality of the two events. What I created was a five-point scale under four different categories: Fright factor, decorations, free food (come on … it’s not a real event without free food) and the overall spirit. With the scoring system formulated and recorded, I wrote down potentially my last breathing words and updated my life will before setting out for my first maze: The Honors A-Mazing Event.

If you’re in UCR’s University Honors program, you know the real reason why the event was so popular amongst your fellow classmates — honors students received a free engagement point (essentially, volunteer hours) from it. It sounds silly to be endowed engagement credit for simply walking through the highly decorated cluster of cubicles that make up the honors suite in 381 Surge.

But the event served a purpose deeper than simple amusement, especially for those who volunteered for the event.

“For the people helping out, they had to learn how to time manage and be accountable,” explained Sydney Schabacker, an honors ambassador for creativity and innovation who coordinated the event alongside three other honors ambassadors — Melanie Queponds, Suketu Dudhat and Vanessa Le  — and honors counselor Latoya Ambrose.

Within the honors system, all activities center around the three core values of creativity and innovation, culture of contribution and diversity and global citizenship. “This event in particular fulfilled the creativity and innovation pillar because we wanted people to come and just expect to have fun. There was a lot of leadership involved and the coordinators of the event had to keep everything straight and make sure everyone was doing something,” described Schabacker.

The attendees were also expected to receive a meaningful experience from the maze, as Schabacker humorously added, “The event also embraced facing your fears and trusting your friends because they can come up behind you and scare you even worse than we did!”

Upon entering the maze, which was marked by the doorway into the honors suite, I had to urge another attendee to go before me since I am naturally faint-of-heart, and seeing the dark, dimly lit hallway, complete with sheer black curtains and blood red paper streamers made the hair on my arms rise even higher.

Indeed, despite being in the middle, I was the one screaming the whole time at even the smallest jerks of movement and probably broke some ear drums along the way. 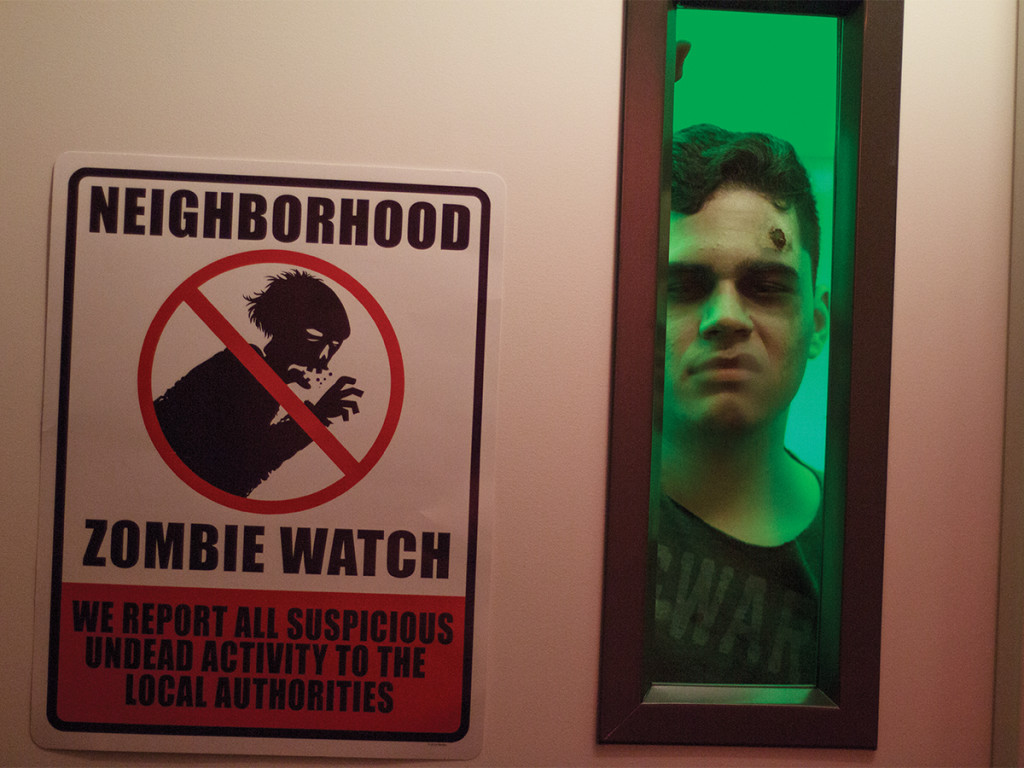 Flickering lights and audio recorded screaming sounds were hidden behind doors, making the cubicles seem like individual slaughter rooms. The atmosphere was amped up by having chilling soundtracks from horror television shows such as, “American Horror Story” and “Stranger Things” emanating from the background.

However, toward the end of the maze, which arrived after only about three minutes of walking, the whole experience turned humorous, as I eventually got used to the random characters popping out at me and could easily recognize that the actors were not real ghosts or zombies. I even offered one of the actors a piece of candy after she shrieked that she would “follow me home,” to which she replied, “Oh … maybe later.”

Although not too much of a horror house, other attendees seemed to enjoy the event for other reasons, such as the elaborate decorations curated by the honors volunteers and the multiple television show themes that were incorporated.

“I thought it was well put together — the way they had many volunteers and the theming. I really liked the ‘Walking Dead’ part and ‘Stranger Things’ portion at the end and they did a really good job of putting the decorations together,” stated Augustus Prouty, a third-year creative writing major, who stood around after the event to watch “The Nightmare Before Christmas,” which they amiably screened in the lobby for all of the event goers.

Students also delighted in the bowls-on-top-of-bowls of free candy offered at the conclusion of the maze, in which successful survivors could grab a few Twix bars and relax while watching “The Nightmare Before Christmas” with other students.

The dedication toward the event and companionship amongst the volunteers was apparent when, behind the scenes, they would let the covers loose by engaging in playful tomfoolery with the props and having horror movie sing-alongs in between runs.

The spirit of the event was most celebrated by its volunteers, many of whom had been in the office since that morning working on the decorations and props.

“I came in at 10 a.m. and I’ve been here since (10 p.m.). We had to make sure the place looked as little like an office as possible and most like a maze by setting up obstacles, streamers and sectioning off the different themes,” offered Suketu Dudhat, a fourth-year biology major and volunteer for the event. “I loved it … especially when the crowds actually got scared. Sometimes they screamed and we felt like we actually did something fun for them.”

The dedication toward the event and companionship amongst the volunteers was apparent when, behind the scenes, they would let the covers loose by engaging in playful tomfoolery with the props and having horror movie sing-alongs in between runs.

“With honors, you have a community. So we had to know it wasn’t just the four of us coordinating the event but there was also an entire support network with us. We had at least 40 people come through today to help us and they made all the difference,” reflected Schabacker.

Although they have held Halloween events in the past, this is the first year that the honors program held the maze and they hope to continue it in the future with some tweaking to incorporate more honors values into it.

I got lucky by beginning with the Honors A-Mazing Event, as it was more of an event to relish in while bonding with your fellow peers and community, rather than those that are solely there to scare. However, because the honors students still managed to make me scream during the first two minutes, I’m Charmin Ultra Soft-equipped and prepared to get shit-wrecked at the SRC Haunted House and Halloween Dance Party next Monday, or Halloween Day.

See how Jasmine does at the SRC Haunted House and Halloween Dance Party in our next issue, and don’t forget to check out our YouTube channel @Highlander TV for an up-close GoPro experience of walking through these two mazes!