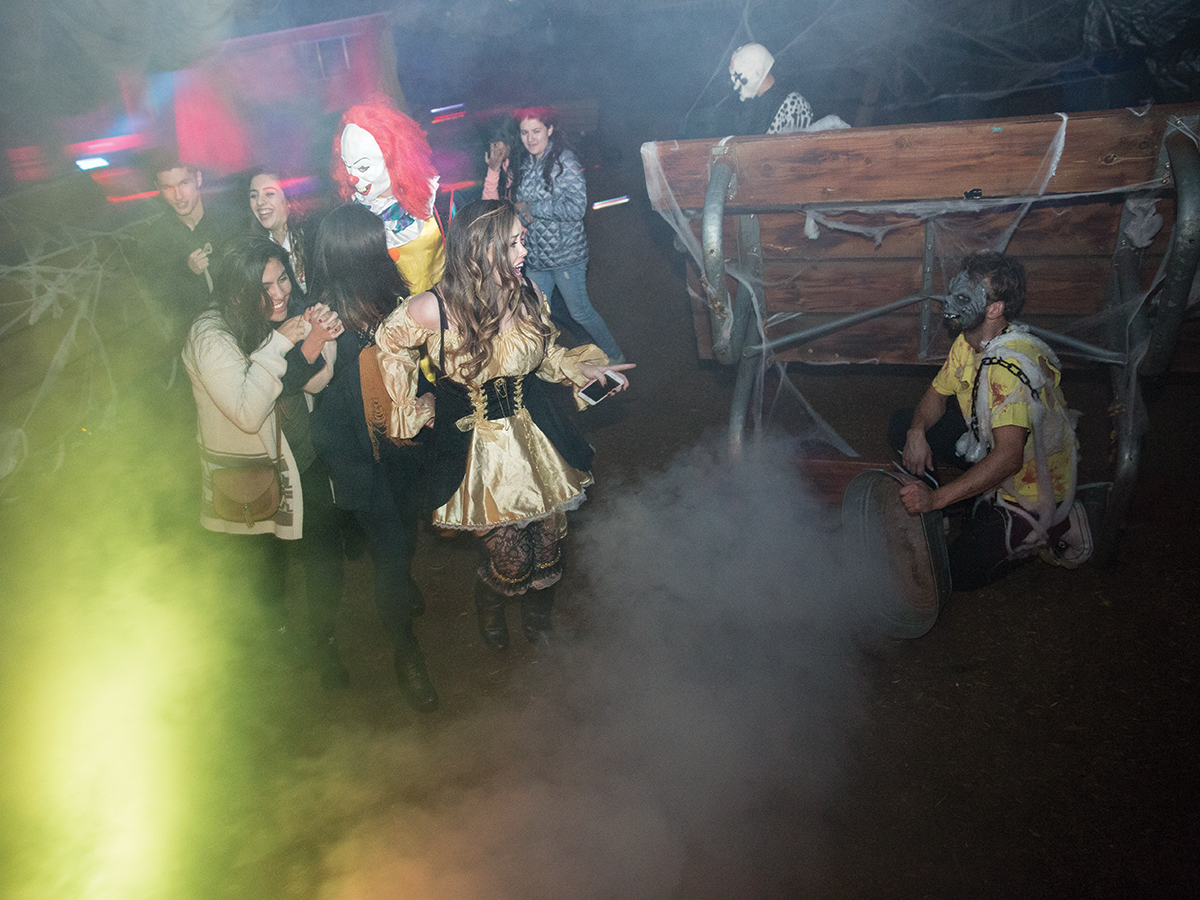 Would I ever “SRC” the light again? You’ll find out if you read until the end!

Last Wednesday, Oct. 26, I entered the dooming lair of the 381 Surge University Honors Suite to experience their much-anticipated Honors A-Mazing Event, which they claimed in their weekly engagement point email to be “not for the faint of heart, as there will be jump scares and strobe lights.” Although holding lots of promise for University Honors students who were excited to receive an engagement point (which is basically a volunteer hour in the honors program) simply for walking through a Halloween maze, it turned out to be not nearly as frightening as it was hyped up to be, nor anywhere close to the length of the maze at Knott’s Scary Farm or Universal Studios’ Halloween Horror Nights (the Honors maze probably lasted no more than two minutes, as it was limited to the area of the Honors Suite). However, it certainly made up for its lack of thrill in other areas, such as the extensive effort put into the decorations, free candy and dedicated spirit of the volunteers.

Yet, what loomed ahead of me was yet another maze to journey through, one that would perhaps be the “real-deal” in terms of a Halloween maze, a labyrinth filled with goosebumps, lost breaths, piercing screams and creepy clowns. I was expecting to get shit-wrecked this time.

By the time I, as well as a few members of the Highlander video crew, reached the gate to the Student Recreation Center’s (SRC) outdoor excursion course around 7:30 p.m., there was already a line of girls wearing cat ears and dudes dressed as superheroes (just to name a few of the costumes I saw there) giddily waiting to face the rousing event — which we assumed it was since we could hear people shrieking from across the street from the SRC. At that point, the maze had only been open for 20 minutes and yet the line already reached from the course up to about a quarter-way through the SRC North Building.

While awaiting my fate in the long line, I got to chat with the gatekeeper, SRC rock climbing employee Marian Eskander, who told me that the SRC staff “wanted to do something that people would enjoy and engulf the Halloween spirit.” When offering her own opinion of the event, she reflected, “I think this was the perfect way to do it. It offers the fear factor like the one at Universal Studios (Halloween Horror Nights) but you’re also having fun and you’re with your friends. It’s definitely intense and if you get easily frightened, you definitely shouldn’t be here.”

When the gates finally opened and we were led into the maze by a hockey-masked tour guide, adrenaline-pumping music from the live DJ at the dance party gradually disseminated as we furthered through the wispy clouds of smoke. As we began to lose ourselves in the maze, it felt as though the outside world just disappeared. I had a feeling that something would jump out at me out of nowhere, similar to that unnerving feeling in which someone tells you that they are going to poke you at the side of the waist but doesn’t tell you when.

… adrenaline-pumping music from the live DJ at the dance party gradually disseminated as we furthered through the wispy clouds of smoke. As we began to lose ourselves in the maze, it felt as though the outside world just disappeared.

When the long entrance hallway got dark, we were welcomed by three clowns staring down at us from a patio, joyfully intimidating us before we would meet them again around the corner.

At this point, I was already clinging to my videographer friend, Christina, asking her if I could just hold onto her arm throughout the whole maze. But when I turned around and noticed a clown dressed in a black and white striped jumpsuit following us, I completely lost it and zipped past everyone in front of me as though I really thought I was going to die.

We followed our silent tour guide into a circus roundabout that was emanating with clouds and flashing lights. If it weren’t for the people in front of me, I genuinely would have gotten lost … or had a seizure. Then, the clowns popped out of nowhere from the smoke and followed us, until we reached another dark area of the excavation camp.

As the black of the night engulfed us and the carnival became something of the distance, uncertainty approached us from all angles of the dirt path.

We could sense things all around us — dead things — but just didn’t know where they were. Then, out of nowhere, our eardrums were blasted with pounding metal clashes, and we were chased by heavily decayed-looking zombies who seemed to have emerged from the dirt. It was hard to believe these ground-deriving humans were students just like me, as they struggled to walk and produced off-putting gurgling noises as a real zombie would. From that point on, I’m pretty sure I was just screaming all the way up to the gate, where upon exiting, the invigorating dance music reappeared and partying bystanders looked at me as though they thought I had too much to drink.

When catching up with one of the other maze-goers who survived the excursion, first-year undeclared CNAS major Shahad Husien, who was still catching her breath after exiting the maze, heaved, “I enjoyed everything about the maze. I think it was as scary as the mazes they have at Universal Studios but it would have been even scarier if we didn’t have someone walking with us.”

What truly made the SRC Haunted Maze exceptional was the effort made on behalf of its volunteers, as they were given the freedom to do whatever they wanted at any point during the maze (except hurt us, of course), so it seemed like there was a true interaction occurring between the maze-goers and the volunteers.

“The best part about being a volunteer for this maze was scaring some guys who tried to act like they were super tough but actually screamed like little girls,” recalled Regan Charley, an SRC ropes program facilitator, who acted as a zombie during the latter portion of the maze.

Beyond the maze, the SRC also offered an all-around, hauntingly good time with a lit (literally, with its wide assortment of neon lights) dance party outside the SRC South building and a gigantic table of free food freshly made by the SRC Recreation staff, such as shattered glass cupcakes, vomiting pumpkins (which was a creative take on guacamole and chips) and polyjuice potion (which was Sprite infused with strawberry and lime juice). Unfortunately they ran out of food early because of its wide popularity and the ravenous party-goers, but the SRC didn’t let that shortcoming get in the way of feeding its attendees, as volunteers scavenged the lines just to offer a heaping crate of Hi-Chew candy, even offering some people handfuls of the sweet treat.

… the SRC’s Haunted Maze and Dance Party was everything that a school event should strive for: Ample screams (in a good way!), hearty laughs, bountiful food, outgoing staff and a variety of activities suitable for people with many different interests.

The SRC truly demonstrated the spirit of Halloween with the SRC Haunted Maze and Halloween Dance Party and proved that the spooky holiday is not just for little kids. Although we can’t blame the Honors team for hosting a far less-extensively financed event, given their space constraint and the fact that it was marketed solely toward Honors students, the SRC’s Haunted Maze and Dance Party was everything that a school event should strive for: Ample screams (in a good way!), hearty laughs, bountiful food, outgoing staff and a variety of activities suitable for people with many different interests. It offered students a hauntingly good time right on campus where all of your friends were around and unforgettable memories were bound to happen.

Curious about what the Honors A-Mazing Event and SRC Haunted Maze looked like? Check out our YouTube channel @HighlanderTV for an up-close GoPro experience of walking through these two mazes!