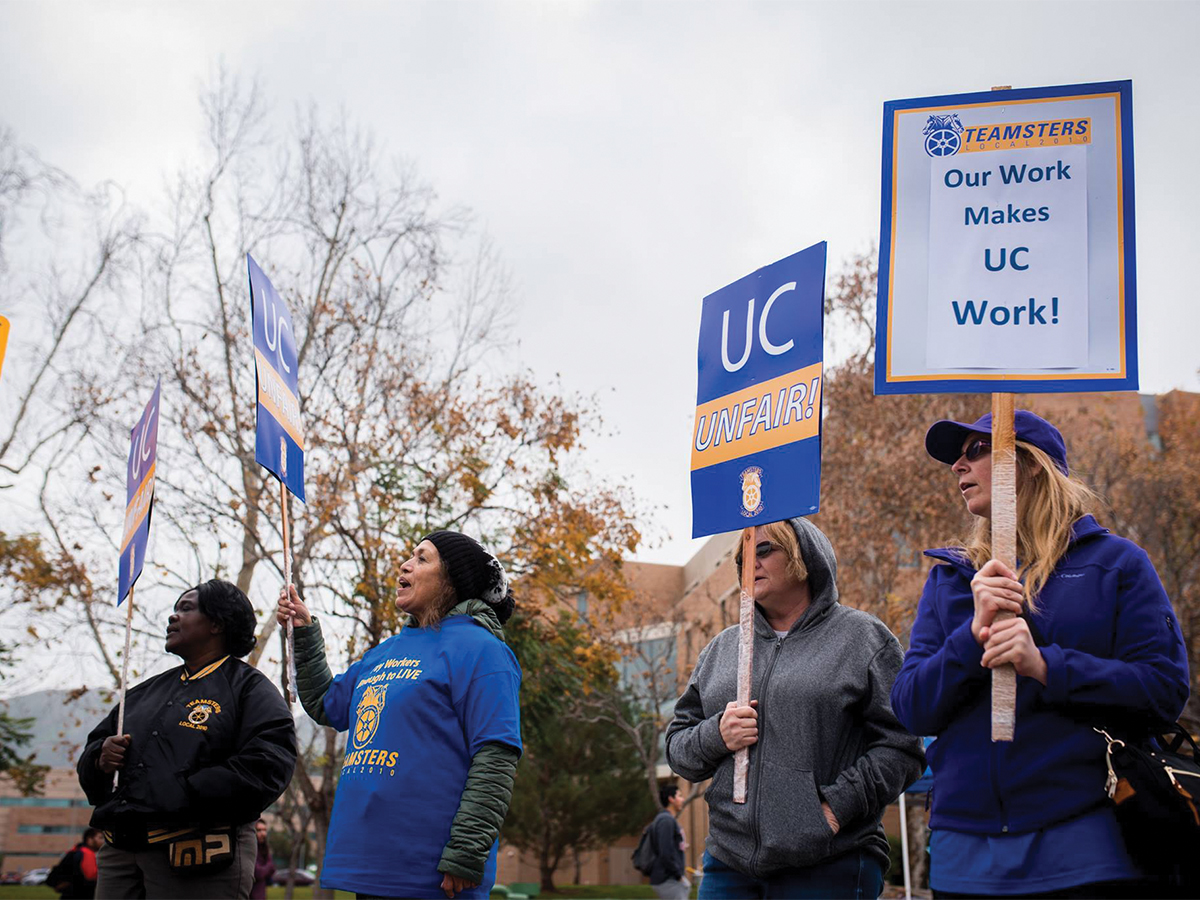 On Tuesday, Jan. 10, UC Teamsters took to the pavement to protest against what the Teamsters argue are unfairly low wages. Employees across all 10 UC campuses demonstrated their cause and the Highlander received exclusive interviews with some of the UCR members of the organization who were actively protesting at the Canyon Crest and University loop as well as near the UCR Physical Plant area. These protesters numbered around 50 clerical, administrative and other related staffers, known as the CX-Unit, along with students who came to show their support.

According to the Teamsters 2010 website, the protests were approved by the Teamsters Union Local 2010 Statewide Council at a general membership meeting. The bargaining team for the CX-Unit called for the strike after contract negotiations failed to reach a mutually agreeable deal before the contract expired on Dec. 9, 2016. This enabled the union to strike lawfully as it is against the contract agreements to strike during negotiations.

Workers called for a salary increase, hoping to “address the problems of low wages and food insecurity.” Many of these concerns were validated when Teamsters were surveyed by researchers at Occidental College where nearly half of the subjects were found to go hungry regularly and 25 percent admitted to being forced to reduce the quality of what they eat.

While the UC offered a raise of 12-18 percent over the next five years, many argue that it is not enough to earn a fair living and proves that the UC undervalues their workers. John Valdez, who works as a budget, personnel and program assistant for Chicano Student Programs, led the strike after assuming the role of captain. “It’s understandable that our main mission is teaching, research and public service, but part of that public service should be offering a living wage to their workers. That does a huge public service and as part of a great organization like the UC, it should be doing that, especially for its most vulnerable workers,” Valdez elucidated.

Shante Morton who is the budget, personnel and program assistant for ASPB, was present at the strike and she discussed how the wages she earns is not enough to provide for her family. “I have been here for 12 years and I have not seen an increase like I have seen individuals on campus get in one single promotion,” she explained. “Not only that, but they are giving us a 12-18 percent increase over a six-year period, but they are also increasing (the cost for) parking and medical so we aren’t really getting an increase. It’s disheartening because I have been here for 12 years and I love the students, I love the people and we just want to be given a fair wage to live.”

That sentiment continued to be voiced as Student Affairs Assistant Stacey Livaudais described how even in a double-income household, her family still lives “paycheck to paycheck.” She also feels that the offer of a 12 to 18 percent increase the UC gave was unfair as it is “contingent on so many conditions which makes it completely personal as well. For example, your annual reviews, that they just completely revamped as well, so it is not necessarily fair.”

The UC Office of the President sent out a blanket statement that stated that their offer had “market-competitive wage increases, good benefits and stability.” It also claimed that the strike was unlawful since negotiations are technically still underway and called for the union leaders to agree to a deal.

Workers that participated in the strike were not paid by the UC for the duration of the strike, but the Teamsters union compensated workers who appeared at the picket line with $100 from the Local 2010 strike fund.