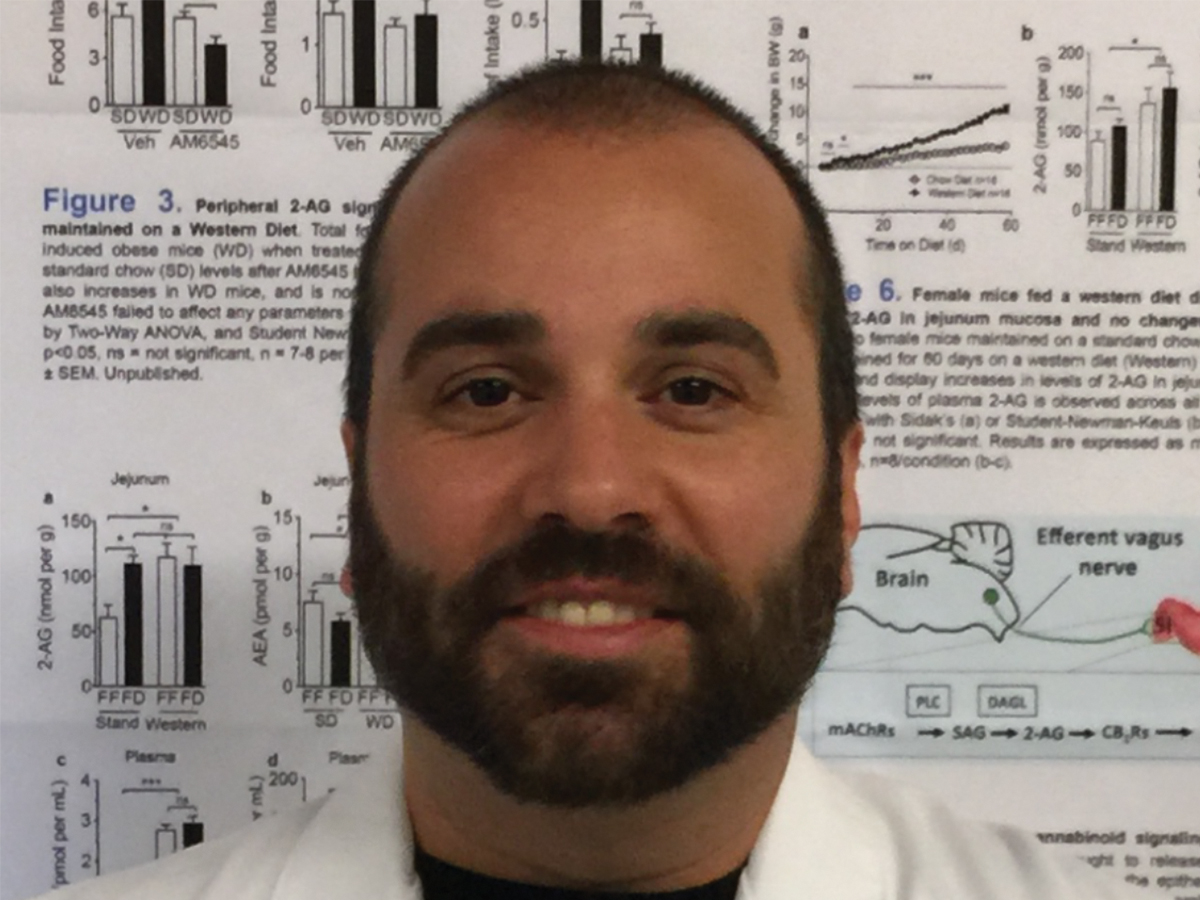 Assistant Professor of Biological Sciences Nicholas V. DiPatrizio, Ph.D., has invested himself in groundbreaking research beginning with his undergraduate studies at Temple University up to having his own research lab at UC Riverside focusing on food reward, sensory processing and metabolism. Although his studies have taken psychological, analytical and biomedical approaches, the common thread between his years of dedicated research has been the function and purpose of the endocannabinoid system that appears to impact hunger levels and human potential for obesity. Over the years, DiPatrizio has accumulated bountiful experience performing independent research and leading both undergraduate and graduate students onto the path for research and publication success. His most recent study, which was published in the journal “Physiology and Behavior” in January 2017, was performed with current UCR graduate student Donovan Argueta and examines how the western diet  — consisting of high amounts of sugar and fat  — can lead to elevated endocannabinoid signaling and serve as a leading factor of obesity in the United States.

Jasmine: What made you interested in neurological studies on diet in general? What led you to study the effects of certain levels of endocannabinoids in our bodies on aspects of human diet?

DiPatrizio: I can trace back my interests to when I was a junior psychology major at Temple University and a particular research opportunity revolving around endocannabinoids came up. It said that I could study under a professor and I could possibly get some publication opportunities out of it. The studies investigated the role of the cannabinoid system in the body and what stimulates the hunger system using a rodent rat model. So I started performing research under this position and released some publications, but I really wanted to learn about the biochemistry aspect of the brain in addition to the psychology. After I was accepted into a biomedical sciences Ph.D. program in neuroscience in Drexel College of Medicine, I approached a professor of the Drexel College of Medicine with the idea of studying endocannabinoids in an area of the brainstem that he was already studying (the parabrachial nucleus, a relay node in the brainstem). Five years goes by and we end up identifying that the cannabinoid system in this area of the brainstem regulates the sensory neurotransmission from the oral cavity. From that point, I moved out to California to pursue a postdoctoral fellowship at the University of California, Irvine under the guidance of professor Daniele Piomelli, who is one of the world leaders in endocannabinoid research. At that point I began to converge a bunch of different areas, from psychological to molecular to behavioral to analytical chemistry techniques. And the common thread between these all have always been that study of the endocannabinoid system.

Jasmine: You said that when you studied at Temple University, the professor had a research project open regarding endocannabinoids. Since that was your very first research-related project, would you say that it was because of that professor that got you interested in endocannabinoids or did you already have a pre-existing intrigue toward it?

DiPatrizio: I didn’t even know what endocannabinoids were prior to that project. It was really that professor, Toby Jarbe, that piqued my interest. I credit all of the professors that have helped me along the way.

Jasmine: Would you say that you endow a lot of what you study now to what you studied under the professors in college?

DiPatrizio: Absolutely. Every single one of them have been so supportive and I stay in contact with all of them and in particular with Professor Kenny Simansky at Drexel College of Medicine, who still helps me with letters of recommendation and other aspects to this day.

Jasmine: Would you say that your professors inspired the way you teach your own students?

DiPatrizio: Absolutely. One thing that I remember professor Simansky telling me was, “Don’t give up” over and over and over. And I still tell that to my students to this day. The times when it feels like we’re struggling are when we learn and it’s usually in hindsight when we make great discoveries.

Jasmine: When you started your own research projects and opened your own lab, how did you gain support for conducting your own projects, such as receive funding, compiling a team, etc.?

DiPatrizio: As a postdoctoral fellow, I applied for a grant from the National Institute of Health called a K99/R00 Pathway to Independence award. It was fortunately funded and provided me with two years of funding to finalize the projects during my fellowship, then once you find a tenure-track Assistant Professor position, you receive an additional two years of funding to help launch your own research program. So as I began my research here at the UCR School of Medicine, a potential Ph.D. student met with me to talk about joining my lab. I let him know it’s a bit of a gamble to begin with a new professor but he helped me set up my lab and I am proud to note that he is excelling. His recently published project has gained a lot of media attention around the world. My lab has now expanded to include three more Ph.D. students and about 10 undergrads. It’s their energy and inquisitive nature that makes this research thrive.

Jasmine: What are endocannabinoids and what role does it play in your research?

DiPatrizio: “Endo” means within and “cannabinoid” relates to cannabis. Cannabis would be ingested and no one knew how exactly it acted to induce physiological changes in the body. In the late 1980s, a receptor was discovered in our bodies called the cannabinoid receptor and cannabis is the key that unlocks it. The receptors were first identified but that didn’t really make sense: Why would we have receptors to just interact with cannabis? Flash forward just a few more years: Scientists discovered our bodies produce chemicals similar to components in cannabis, and it was termed “endocannabinoids.” My lab functions around the questions of, “What purpose does this natural cannabinoid system serve?” “Why do we have it?” and “What physiological and potentially pathological purpose does it serve?”

The times when it feels like we’re struggling are when we learn and it’s usually in hindsight when we make great discoveries.

Jasmine: Would you say that, for the most part, endocannabinoids, when stimulated, only have negative effects on our body?

DiPatrizio: The system is a pro-survival system that drives us to consume high-energy foods and store their energy content in cells for future metabolic needs. Let’s say thousands of years ago, it was feast or famine. There wouldn’t be lots of food all the time. Thus, it would be advantageous to have a natural drive to eat. Unfortunately what happens now, it’s feast all the time, so this natural reward system can become overactive when we become addicted to all these good tasting foods, similar to drugs that we consider “non-natural rewards.”

Jasmine: One of your recent projects (Argueta and DiPatrizio 2017) in which you performed a study on lab mice found that those with higher quantities of endocannabinoids tend to overeat. Do you think this implies that the higher the level of endocannabinoids we have in our systems the more we are compelled to eat? Do you think this could imply that frequent marijuana users could be more compelled to overeat?

DiPatrizio: What our project showed was that in western diet-induced obesity, endocannabinoids are elevated and that signaling event drives binge eating episodes. If we block that signal, the hunger levels of the mice normalize. When we think of cannabis, we think of the “munchies” effect and this will simulate the same receptors that the endocannabinoids do and drive us to eat. What researchers have found is that, in general, chronic cannabis users actually weigh less than average. It is thought that if you bombard the body with these chemicals, an effect known as “functional antagonism” happens, in which too many “keys” to the receptors are floating around and the body adapts by reducing the number of locks (i.e. receptors) that can be turned. So instead of driving feeding, it reduces the urge. It shows how adaptive the body is and they do so by regulating the way the body senses these chemicals.

Jasmine: With this development stage, around 13-17 years old, would you say anyone who has tried cannabis is more likely to experience the adverse effects of the drug?

DiPatrizio: Some evidence suggests that, during development, heavy cannabis usage is associated with some long-term cognitive changes. It is important to note, however, that this relationship between cannabis and the body may not be causative. It may not be the cannabis itself that leads to these changes but some other factor.

Jasmine: Has any of your research affirmed a pre-existing, widely accepted concept?

DiPatrizio: For decades, saturated fat was thought to be obesogenic. We and many others have shown that it may not be saturated fat but linoleic acid that could be triggering our hunger levels and result in obesity. It turned out that tasting saturated fat did nothing to endocannabinoid levels in the body but rather linoleic acid is somehow driving these elevated levels of hunger and fats in the body.

Jasmine: Encapsulating all of your research and what you have learned from them, what is the greatest tip that you give anyone about maintaining a healthy lifestyle?

DiPatrizio: A lot of research shows that benefits of fad diets wear off; it’s all about long-term eating patterns. Your metabolic setpoint can’t change quick enough and you’re bound to rebound back. Can you really maintain those fad diets in the long run? I know it’s cliche but it’s all about moderation. Food should taste good and should make life more enjoyable but instead of eating the whole bag of potato chips, just eat what makes you satisfied and enjoy it.