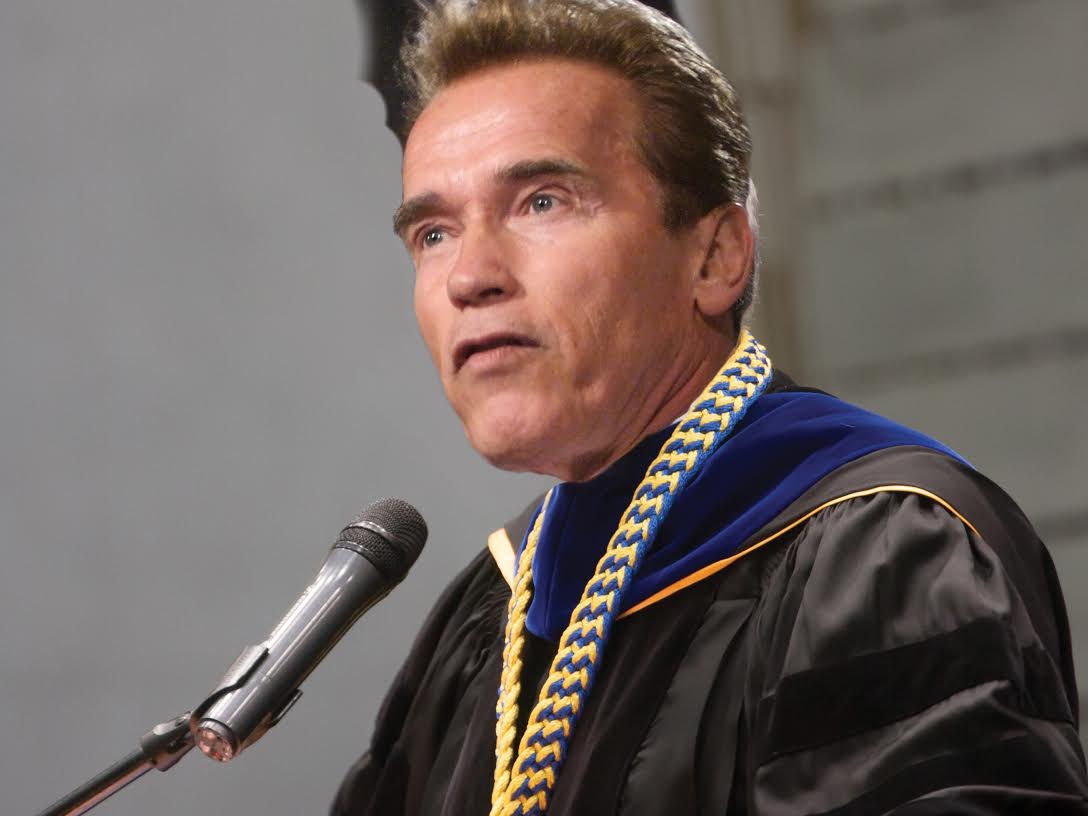 On Friday, March 31, much of the media’s attention was centered on the revelation that a strange body-swapping effect had stricken the world, most notably in the case of President Donald Trump taking over the body of Pope Francis. This, however, is not the only noteworthy case that UC Riverside community should be aware of. As was later revealed, the body of Chancellor Kim Wilcox is currently inhabited by Arnold Schwarzenegger, former governor of California, action movie star and bodybuilder.

Currently, there is no apparent way to reverse this so-called “Freaky Friday” effect, a term coined from the popular movie of the same name, seemingly making these body-swaps permanent. Considering this, this editorial board supports Schwarzenegger taking charge of UCR. There are certainly some questions that must be asked about this man, who lacks experience in education, running a major educational institution, but by and large, this is a change that will bring many benefits to this campus.

For starters, Schwarzenegger brings a vast amount of celebrity to a position that has previously been less than noteworthy. Just as the rise to power of a certain television celebrity to the presidency riveted national attention to American politics, the indirect elevation of Schwarzenegger to the job of chancellor will make students, professors and politicians more attentive to the higher-level workings of our education system. This will thus make the campus community more invested in the decisions made by the new chancellor, and therefore increase transparency of such decision-making.

Furthermore, given Schwarzenegger’s record as governor of California (regardless of one’s opinions on the man’s track record in that position), he already has experience in a major leadership role. Considering how much smaller the responsibilities of a university chancellor are compared to a state governor, Schwarzenegger will be able to take his past experience and apply it more effectively to this new job. Perhaps Schwarzenegger has no experience in education, but force of will and the sense of authority we have placed in him before will likely suffice to accomplish whatever goals he has.

Now, admittedly, Schwarzenegger is not the perfect man for the job. As a figure without experience in education, it is possible that Schwarzenegger will either be incompetent in this role, or he will be totally dependent on outside help and advice to handle the duties of being chancellor. This latter possibility could allow self-serving individuals advising the chancellor to influence him into making decisions that only help those individuals, to the detriment of the campus.

Schwarzenegger’s celebrity status also poses a problem to his ability to lead as he would like. He may be viewed by other major figures in the UC system as a joke — perhaps they would stereotype him, expecting him to act like the Terminator. His collaboration with Trump to host “Celebrity Apprentice” could be viewed as an endorsement of the president, automatically making him that much less popular on this predominantly liberal campus. And, Schwarzenegger has had his fair share of personal controversy, most notably his secret illegitimate child.

Despite these potential flaws, this editorial board wishes to extend its support to our new chancellor, as we believe that he is capable of instituting a number of changes that were unlikely or impossible under previous leadership. Paramount among these would be the expansion of our athletics department. Schwarzenegger’s history as a bodybuilder lends itself to suggesting that the man will support athletics in general, and this is a campus that lags behind other UCs in terms of their athletic success. Just what form such an expansion would take is variable, but ideally, this would include an emphasis on athletic scholarships and perhaps the establishment of a football program. On a similar note, Schwarzenegger’s experience as a noteworthy film actor would probably indicate that he would be a supporter of UCR’s film and arts departments. And if nothing else, Schwarzenegger could push for general improvements such as expanding or renovating some of our older buildings and acquisition of whatever resources this campus needs at the moment.

Arnold Schwarzenegger may not be one’s ideal candidate for a university chancellor; indeed, he would not be our first choice either. However, since it looks like he will be in that position for a while, this editorial board believes it is best to show our support for the man. It is very likely that, since he comes from such a different background, he will usher in a newer and better UCR that will make our school stand out among other campuses nationwide.