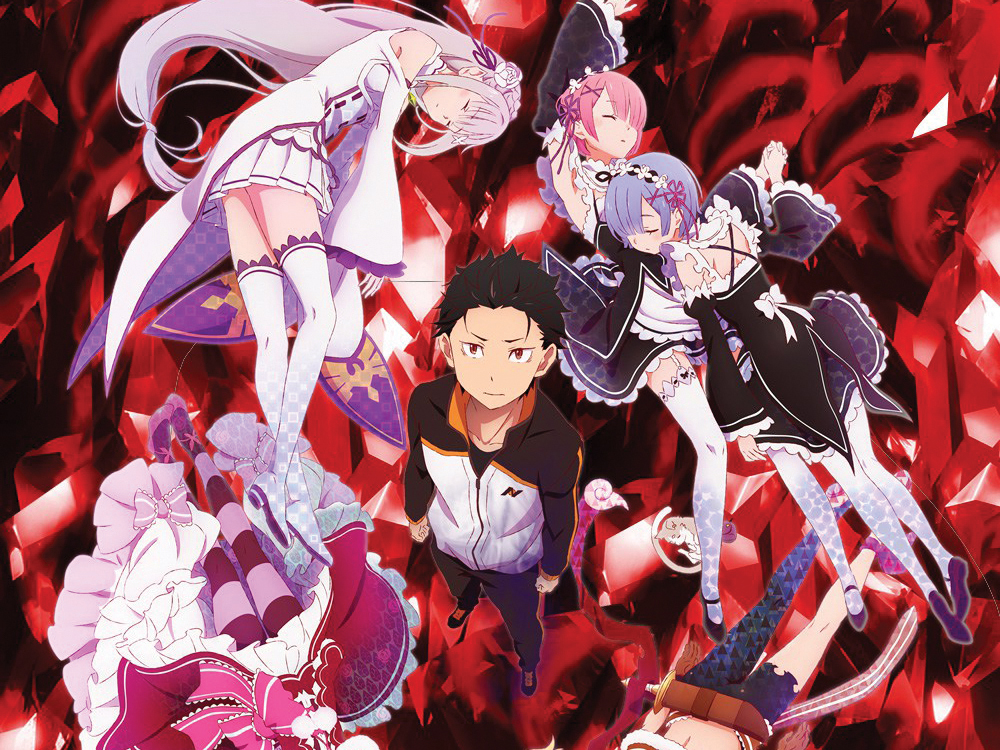 I can picture the summer season now. Beachgoers having fun under the sun as they run amok celebrating the end of another school year. Feeling the chill of the ocean breeze as they traverse around the boardwalk. Or maybe, just maybe, staying at home and catching up on some of the hottest anime of the year.

Summer is when all the newest anime come out of Japan and the past season I had the opportunity to enjoy one of the best modern anime I’ve ever watched in “ReZero.” At first glance, you could totally blow off watching “ReZero” for its seemingly generic premise and characters. You’ve got your awkward gamer protagonist in Subaru, who after a trip to his local convenience store is somehow magically transported to another world. As a stranger in a strange land, Subaru must somehow work against the forces of this new world to find out what is going on as he gets caught up in a conflict that concerns the fate of the nation. To those unfamiliar with anime, the whole “transported into another world” trope has been done to death, not to mention the socially awkward “gamer” character as well. But what made me invested in the world of “ReZero” is the mysterious ability Subaru has. When he dies, he starts his life over “from zero” at a previous save point in his previous life.

As the series progresses, it gets much darker in tone and absolutely brutal. The anime also portrays a level of emotional and psychological trauma that I haven’t seen in an anime in quite a while. It’s difficult to talk without spoilers, but damn if it didn’t have one of the most masterfully crafted episodes of an anime, let alone a series overall, that I’ve ever seen. Let’s just say that if I had to give “ReZero” an award, I would give it the “Most Likely To Be Overlooked for a Generic Premise” award. Trust me, it’s much more than that, and I’m glad I got to enjoy it.

STRFKR “Being No One, Going Nowhere”

Last year, STRFKR reentered the indie rock scene with their LP “Being No One, Going Nowhere,” while also reawakening the band’s signature electronic pop sound with redefined confidence. Based in Portland, Oregon, STRKFR gained notoriety as an electronic indie rock band through their hit track, “Rawnald Gregory Erickson the Second” off their 2008 album “StarFucker.” Since then the band has dropped the 2009 album, “Jupiter” followed by their 2013 release, “Miracle Mile,” which felt unmotivated and simplistic when compared to their other efforts. Despite the setback, the band went through three years of hibernation in which lead singer Joshua Hodges’ solitary journey into Joshua Tree to find spirituality became the catalyst for the band to produce “Being No One, Going Nowhere” that resonates an emotional escape from life’s claustrophobia with its juxtaposition of jubilant production intertwined with melancholic lyricism to exemplify Hodge’s sobering self-discovery.

Immediately the album does not hesitate to beam into drumming bass lines and stellar synths in their first track “Tape Machine,” giving the listener an initial taste of the project’s animated atmosphere. With the track “Satellite,” the production transitions with a splashing beatpad met by laden guitar strumming to ease the song into a more mellow tone, as the lyrics, “I felt so close to a cure/ In a moment of passing time” become bogged down in it’s liminal state. The tracks “Never Ever” and “Maps” encompass the tonal distinctions of “Being No One, Going Nowhere” with their contrasting spectrums of sound; the playful melodic keyboard of “Never Ever” makes you just want to get up and dance away as a release from emotional weight of it’s lyrics, whereas “Maps” has heavy electronic notes that wail like a distorted siren while Hodge’s poetic lyrics yawn and stretch over each beat. The light airy vibrancy of Hodge’s vocals capture the spirit of his lyrics, “Take my body and Let it,” as he repeatedly exhales each line as if he were letting out a sigh of relief.

From warm guitars to deep synths and futuristic electronic beats, STRFKR takes their trademark electronic indie pop sound and transforms it into blossoming cosmic tessellations. Their energetic digitized atmosphere paired with Hodge’s airy vocals revive the band’s musical capacity to an album that feels confident and unhindered. Both the instrumentation and lyricism work in harmony to create a charm and catchiness to each of it’s songs. If you haven’t had to chance to hear yet, let “Being No One, Going Nowhere” enlighten your ears to STRFKR’s essence of self-expression.