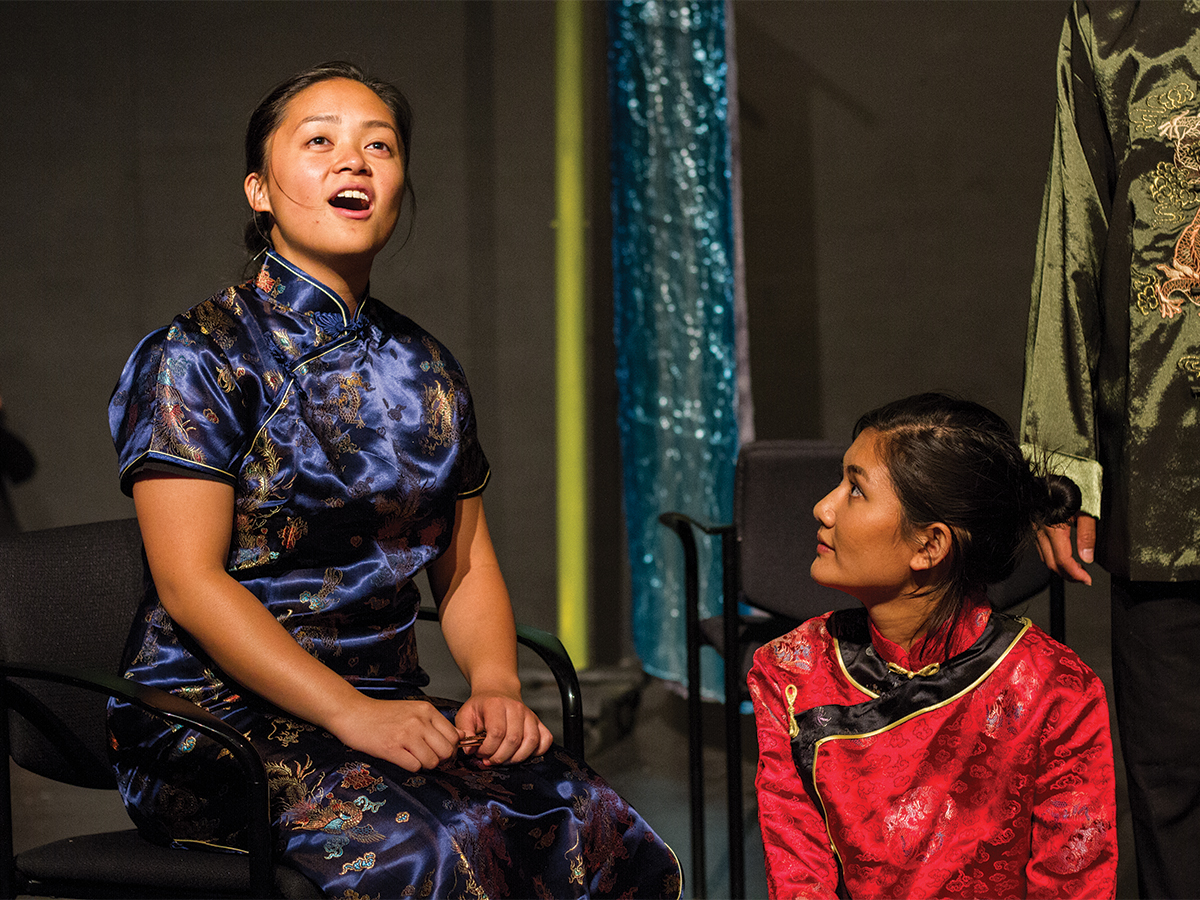 Home Radar Concerts and Live Performances “Princess Ten Ten and the Dark Skies” is fun for all ages
1,090

After two weeks of rehearsals, the Guardian Ambassadors and Model Minority Theatre Collective, in partnership with the UCR Department of Media and Cultural Studies and the Department of Theatre, Film and Digital Production, presented “Princess Ten Ten and the Dark Skies” in Humanities 411. Adapted for the stage by Maggie Herskowitz, a CSULA and Boston Conservatory graduate, and composed by Jillie Mae Eddy, who received a M.A. from The Royal Central School of Speech and Drama in London, “Princess Ten Ten and the Dark Skies” tells the story of a gender non-conforming and pollution-fighting princess. Princess Ten Ten is one of the princesses in the Guardian Princess storybooks created by Setsu Shigematsu, an associate professor in the Department of Media and Cultural Studies. The storybooks feature diverse princesses who promote environmentalism, diversity, positive self-esteem and kindness. Princess Ten Ten is the guardian of the skies who fights pollution in the world, and the musical depicts how she came to receive that title.

“Princess Ten Ten and the Dark Skies” takes place in the mythical Fusan (meaning, wind city) where Ten Ten is bullied by her peers for not acting ladylike and for wanting to learn tiandao, a practice reserved for boys. Ten Ten’s father, King Wu, is persuaded by his royal advisor and the story’s antagonist  Li-Wei, to send her to live with her grandmother in hopes of changing her unladylike behavior. But her grandmother encourages her to be herself and to use her talent as a wind master to fight against pollution and save the earth.

Angela Briones, a third-year biology major, leads the cast as Princess Ten Ten. As the princess, Briones’ body language and portrayal of Ten Ten is charming as she displays a hopeful energy, embodying a real-life princess. Veronica Layos, a fourth-year environmental science major, also stands out for her role as Grandma Sun Hee who encourages Ten Ten to not hide who she is and to be confident. In many scenes, the audience laughed at Layos’ physical comedy. Singing was also a strength of the cast as a whole, with the cast harmonizing beautifully throughout the musical numbers.

Apart from the acting, the production itself was outstanding. The costumes were beautiful as their patterns were loyal to Asian style. Costumes played a big role within the play as they were also used to identify whether a character was male or female. The set design was also clever, decorated with light blue banners on one side to represent the clear sky and dark grey on the other side to represent the polluted or “dark” skies.

The musical is still in development as survey sheets were passed to the audience to fill out after the show to provide feedback. And while the quality that was put into the musical is impressive, there are still certain elements that hopefully will be fixed as it expands. For one, there was no live orchestra and the instrumental that was playing throughout sounded so loud at times that it made it difficult to hear the actors singing.

After the Friday, May 26 performance, there was a talk back with Shigematsu, Briones, environmental science professors Roya Bahreini and Ying-Hsuan Lin, gender and sexuality studies professor Tamata Ho and fifth-year theater, film and digital production and creative writing double major Kristen Asada. They discussed the process of adapting Princess Ten Ten into a musical and the impact they hope to make through its representation of Asian-Americans and gender non-conforming people.

The audience included college students along with many children and parents. While “Princess Ten Ten and the Dark Skies” is targeted toward young children, it is still an enjoyable experience for people of all ages. During the talkback, one audience member asked the children in the room what they thought of the musical. One parent said that their children loved the musical and she almost broke into tears when talking about there not being enough role models in the media to encourage kids to be themselves.

Princess Ten Ten doesn’t just provide an Asian princess for children to look up to, but a role model whose perseverance and integrity can be inspiring to people of all ages and genders.