Highlander
Home Radar Movie Reviews “Flatliners” should not have been resuscitated 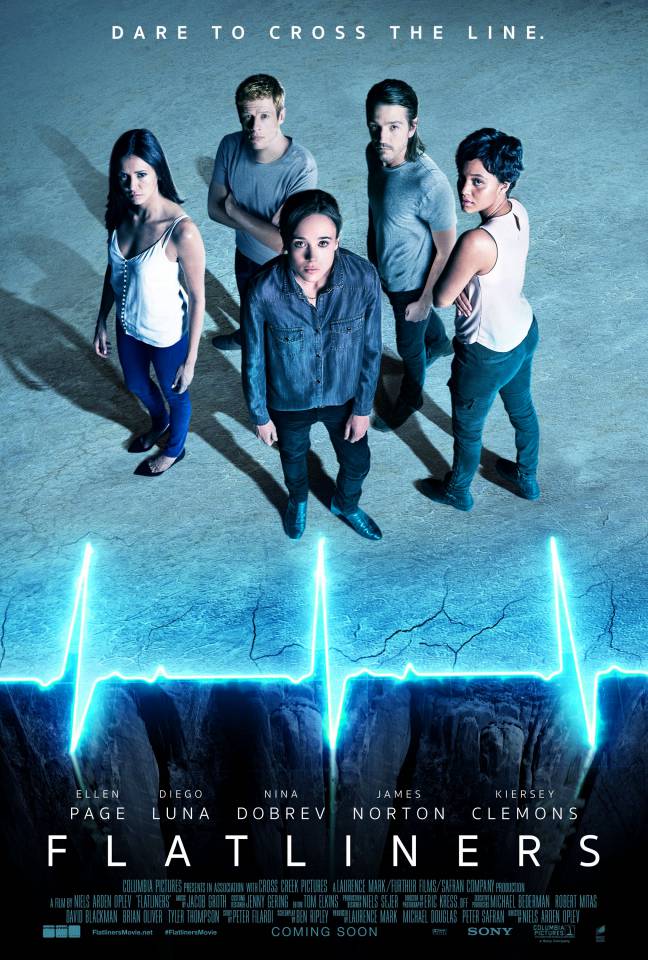 Ah yes, “Flatliners,” Joel Schumacher’s 1990 cult classic film starring Kiefer Sutherland about med students flatlining themselves to see what lies beyond death. Now that is a film long overdue a blockbuster remake. Fans have been practically begging for a contemporary re-imagining that not only introduces stupid, annoying and unlikeable characters, but one that also adds nothing to the horror genre. Thank you Sony Pictures, for always pleasing moviegoers like me with the hits! After I write this review I will be sure to write a heartfelt email on my Sony Xperia personally thanking you for the dumpster fire that is its 2017 remake.

“Flatliners” is purportedly a sequel to its 1990 source material, but don’t let that fool you, it’s a marketing gimmick whose only connection to the original is the inclusion of Sutherland’s character. Not that it matters, but there’s a potential that this remake could have gone somewhere other than Boredom City had its plot done anything other than copy-paste the beats of Schumacher’s original film save for one inconsequential (and horribly disengaging) change in the middle.

To director Niels Arden Oplev’s (“The Girl With the Dragon Tattoo”) credit, “Flatliners” begins on a relatively intriguing note — “begin” being a relative term since it takes a few minutes to go through its opening credits. But screenwriter Ben Ripley cannot take the credit for the little bit of intrigue in the movie, considering that was the catch of its predecessor. Ripley’s twists are subtle, but it’s a subtlety that belies the stupidity of the film’s plot. Recording brain activity with updated technology immediately post-mortem is cool; getting drunk, creating a hole in a wall and vaguely interfering with traffic as CG hail falls is not. In rewriting the slightest of details, the characters and their personalities age as well as a gallon of milk would in the heat. Also apparently the afterlife is a hilariously shitty CGI-rendered version of the regular world except there’s blue lights and you can ride motorcycles. Because fuck you that’s why.

Ellen Page is a protagonist of sorts as Courtney, with her most distinguishing feature being that she feels guilty for the death of her younger sister in a car crash nine years ago. Features like that and little more constitute the film’s attempt at characterization. Diego Luna’s character, Ray, is really smart and doesn’t flatline — that’s it; Nina Dobrev’s character, Marlo, is really pretty, has a fling with Ray and feels guilty for inadvertently killing a patient two months ago — that’s it; Jamie Norton’s character, Jamie, is rich and handsome and feels bad for not following through with helping a girl he knocked up get an abortion — that’s it; Kiersey Clemons’ character, Sophia, feels pressured to succeed at school because of her mom and feels guilty for leaking a girl in her high school’s nudes — that is entirely it. They are insufferable to follow as they pursue the crumb trail of horror cliches provocative of the deepest of sighs. And in case you didn’t know, med students are smart; the film constantly shoehorns medical diagnoses and first year psychology terms to legitimate hilarious results. “Amygdala — that’s fear, emotions;” damn, thank you miss doctor lady, you sure are helpful and not incidentally goofy.

Science fiction horror film this is not. Run-of-the-mill jump scare machine it is. There are times where “Flatliners” builds tension that firmly grasps the audience, but the fear in that dies when a timely sound coordinates a startling assaults on your ears with the help of a mildly spooky image. A single scene in the entire film sets itself up for this type of jump scare, yet shows the film’s only true restraint when the payoff fails to arrive — a congratulatory feat had the scene not otherwise been replete of tension and only serving to prolong the film’s end. Cliches upon cliches form the mound of garbage that is this film’s attempts to legitimately frighten.

When the film finally feels like it’s winding down, it stalls. And its denouement does inevitably come to save the day, in a laughably rushed execution befitting of the film’s subpar quality.
Verdict: “Flatiners” is (obviously) an unnecessary remake. The two hours that director Niels Arden Oplev asks for is too much: In that time span is little more than a long drawn out sequence of events that, beyond some of its opening minutes, is a boring mess.