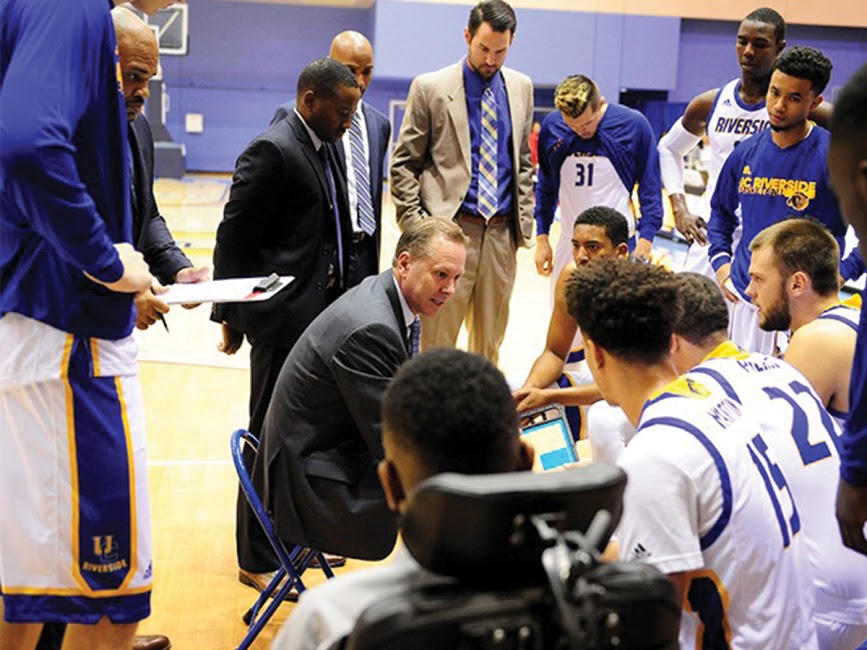 Adding on to their opening run, the Highlanders went on a 14-2 run late in the first half, going into halftime up 40-21. The Highlanders led by as many as 23 points in the opening half.

Senior Alex Larsson recorded the second double-double of his career, putting up career-highs in both points (15) and rebounds (13). Redshirt senior Brandon Rosser added 13 points in only 17 minutes of play, while shooting 5-6 from the field. Sophomore point guard Dikymbe Martin had an all-around night, finishing with 12 points, 12 rebounds and seven assists.

“No one really counted us to have any part in this game,” Martin told Berkeley media. “Before this game, I was watching Utah Valley against Kentucky and you’re like, ‘Anything’s possible.’ And it is.”

Martin was referencing Utah Valley getting a 34-25 first half lead over Kentucky, but they eventually fell 63-73. Unlike Utah Valley, however, Riverside was able to hold on to their first half lead and stave off a last-minute Cal comeback, as the Golden Bears pulled within a 62-53 deficit with four-and-a-half minutes left in regulation. Martin halted their run with a short jumper and redshirt freshman shooting guard Dominick Pickett made a crucial three-pointer to help Riverside pull away.

UCR returned four starters from last year’s team that put up a mere seven wins. With the rest of the team yet to have sufficient experience, this year’s squad was picked to finish eighth — in a conference with nine teams — in the Big West preseason poll.

The Highlanders win spoils Cal coach Wyking Jones’ debut for the Golden Bears. Jones previously served as assistant coach for Cal from 2015-2017 and was in charge of coaching the team’s big men, helping forward Jaylen Brown earn 2015-16 All-Pac-12 and Pac-12 Freshman of the Year honors before being drafted third overall by the Boston Celtics in 2016.

Though it is only one game, the Highlanders getting a victory over a Pac-12 team under their belt should motivate the program going forward.

The Highlanders’ next game is on the road against Loyola Marymount University on Wednesday, Nov. 15 at 7 p.m.