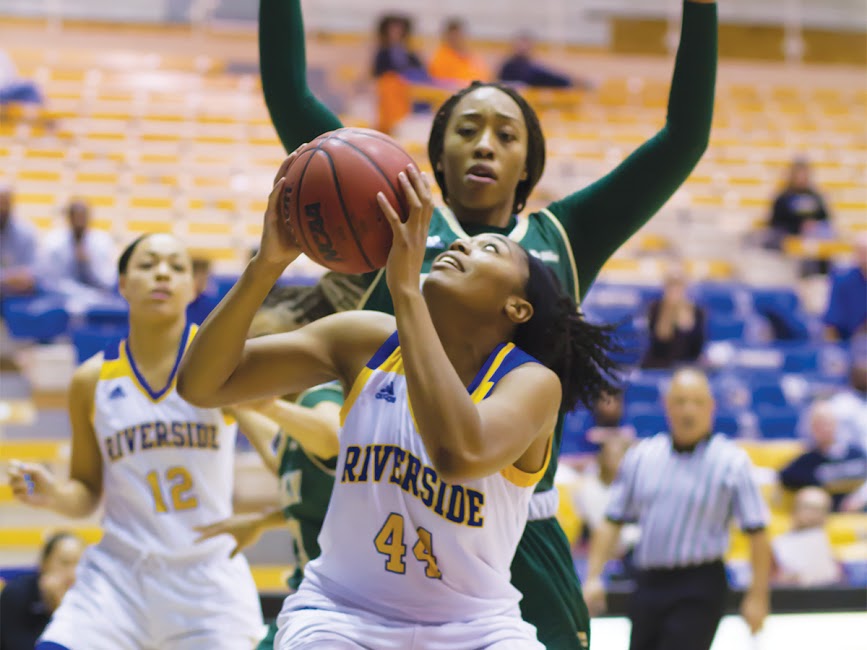 UCR’s women’s basketball team (4-12, 1-1) opened up the new year and Big West Conference play by splitting a pair of home games. The loss came against the Cal Poly Mustangs (7-7, 1-1) on Thursday, Jan. 4 in an overtime thriller that saw the Mustangs come out on top 87-82.

The Highlanders had four different players reach double-digit scoring on Thursday, with senior guard Michelle Curry leading the way with 19. Unfortunately, UCR was forced to play without Curry in the fourth quarter, as she fouled out in the first minute of the period. To make up for Curry’s exit, redshirt senior guard Lauren Holt came alive in the second half, scoring 14 of her 17 points and shooting a perfect 3-3 from behind the arc.

Sophomores Marina Ewodo and Jannon Otto pitched in 14 and 13 points respectively, but the standout sophomore of the night was Jalyn Clay, who posted a career-high nine points and seven boards. Clay’s final three points came on a three-point play to give the Highlanders the lead 77-74 with 30 seconds remaining in regulation. However, Cal Poly’s Dynn Leaupepe, who torched the Highlanders for 40 points on the night, would not let the Mustangs go down easy, as she hit the game-tying three-pointer with 10 seconds to go. Despite UCR forcing a season-high 21 turnovers, the Mustangs were able to outlast the Highlanders in overtime.

After a day’s rest, the Highlanders bounced back with a 77-53 win against Cal State Long Beach (2-14, 0-2) on Saturday, Jan. 6 and Curry was at it again for the blue and gold. She dropped 23 points and pulled down a career-high 12 rebounds for her second double-double of the season and seventh of her career. Curry finished 10-17 from the field and tallied six assists and a season-high five steals. Both teams came out with good energy, as the first quarter ended in a 13-all tie, but the Highlanders got some separation thanks to a 12-2 run to close out the first half. UCR started the fourth quarter leading 53-41, and put the game away on an 18-5 run for the convincing victory.

The Highlanders as a team filled the stat sheet out, tallying season highs in steals (15), rebounding margin (+23) and forced turnovers (22). Also, in just her fifth career start, Ewodo had herself a productive night with 12 points, 11 boards, four assists, three blocks and three assists for her second career double-double. Holt pitched in 10 points, giving her double-digit scoring in nine straight games.

UCR will look to continue their dominant efforts on both sides of the ball as they travel up north to take on UC Davis on Thursday, Jan. 11.