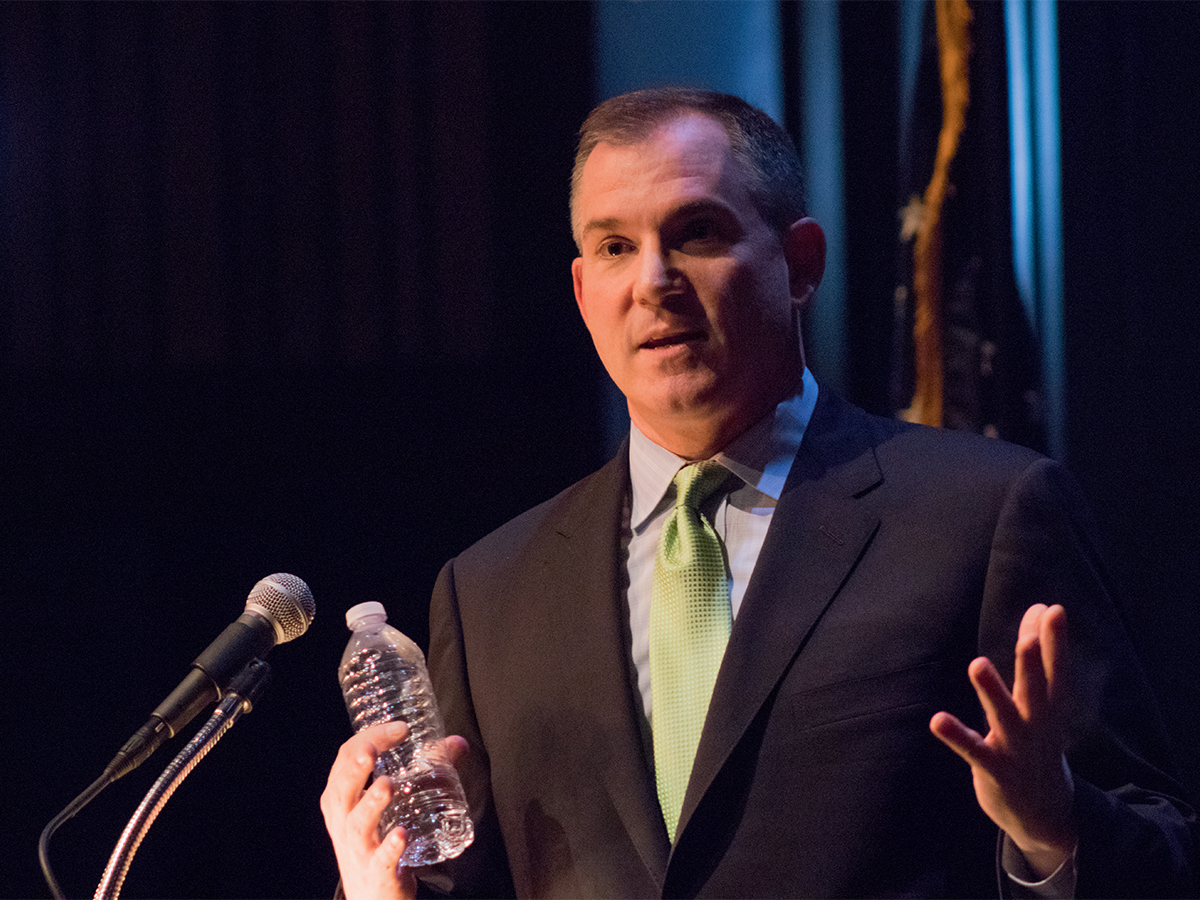 The topic of fake news in modern America once again took the stage in academic discourse, as New York Times opinion columnist Frank Bruni discussed the issues surrounding journalism during the presidency of Donald Trump. Bruni argued that news media, encouraged by the unusual character of the Trump presidency, has lost sight of its responsibility to maintain professionalism and neutrality in “chronicling” political events.

Bruni’s talk, presented as the Hays Press Enterprise Lecture and introduced by Chancellor Kim Wilcox, is the latest in a series of annual lectures, sponsored by an endowment honoring Howard “Tim” Hays Jr. in conjunction with The Press Enterprise. The lecture series is funded in memory of Hays, once publisher and owner of the Riverside-area paper, and is in its 49th iteration since its inauguration in 1966.

Following an introduction by Wilcox, Bruni took the stage to present his observations and experiences as a nationally-renowned journalist. Bruni expressed gratitude for the opportunity to speak and highlighted the importance of establishing platforms for the free exchange of ideas.

Bruni then opened with an anecdote about Trump’s recent visit to Michigan, where he criticized news media for propagating “fake news.” This charge has become commonplace in Trump’s many interactions with journalists. Bruni highlighted that, the same night, journalists and other media personalities convened in Washington for the annual White House Correspondents’ Dinner, where comedienne Michelle Wolf chastised Trump and joked at his expense. Among Wolf’s targets were other senior personalities in the White House including White House Press Secretary Sarah Huckabee Sanders. Wolf’s critique of Sanders drew much attention as her remarks were aimed at Sanders’ appearance and fashion sense.

The reaction to these comments, although mixed, was typical of modern day media, according to Bruni. The “trainwreck,” as Bruni characterized the media reaction, showed Americans that news media, decried by the current administration as elitist and biased, could not claim the moral high ground. Bruni questioned “whether we in the media are projecting the right image and making the right impression.”

Such behavior, which failed to meet professional standards, has resulted in “many Americans (having) such a low opinion of (the media) … We are not fake but we are flawed, in ways that render us vulnerable to the president and warrant adjustment,” Bruni explained, adding, “We indulge too often in snark for snark’s sake.” The speaker explained his own forays into political satire, culminating in an article in which he compared Trump’s famed coiffure, a topic of debate among commentators unsure of its true hue, to a “mood ring.” Bruni explained that this sarcastic style, although entertaining, was irresponsible and fed into Trump’s narrative of a confrontational and immature press. Such cavalier behavior, according to Bruni, needs to stop.

Bruni also commented on the double standards in today’s journalism, which leave journalists open to counter-allegations of intolerance and discrimination. The criticism of women in the White House, for example, such as First Lady Melania Trump or Sanders, has been characterized by comments that, if applied to other prominent women, would be considered sexist and taboo. Bruni explained that, barring serious and extreme right-wing individuals, critics throughout Michelle Obama’s time as First Lady largely respected her fashion choices and refrained from criticizing her appearance. According to Bruni, “we can’t gape and laugh.”

The speech closed with an examination of journalists’ place in covering politics. Journalists, Bruni argued, often present facts in a skewed way intended to garner more attention rather than protect accuracy and context. Recalling the story of Mick Mulvaney, current director of the Office of Management and Budget in the Trump cabinet and former US congressman from South Carolina, Bruni noted a lack of context as detrimental and politically motivated. Mulvaney was on record saying that, during his time as a representative, he refused to speak with lobbyists who did not financially contribute. What most news sources omitted in an attempt to portray Mulvaney negatively was that he went on to explain that only constituents had his full attention, whenever they would visit.

Bruni closed with some thoughts on the integrity of modern journalism. Americans, he said, trust news less than ever, with the charge led by Trump himself. As a result, news media have to respond with character and honesty. “We should not, we cannot hand the president any reason to discredit us as partisans having an indiscriminate meltdown … he conflates the nation’s business with show business; we shouldn’t follow suit,” Bruni explained. “The news we report is real, but so is the need to be even better at reporting it.”

Editor’s Note: A previous version of this article had incorrectly stated that UCR Distinguished Professor of Creative Writing and Editor-in-Chief of the Los Angeles Review of Books Tom Lutz had introduced Bruni, alongside Chancellor Kim Wilcox. Lutz, in fact, did not introduce Bruni, but was listed as such on the event program. The Highlander regrets this error.