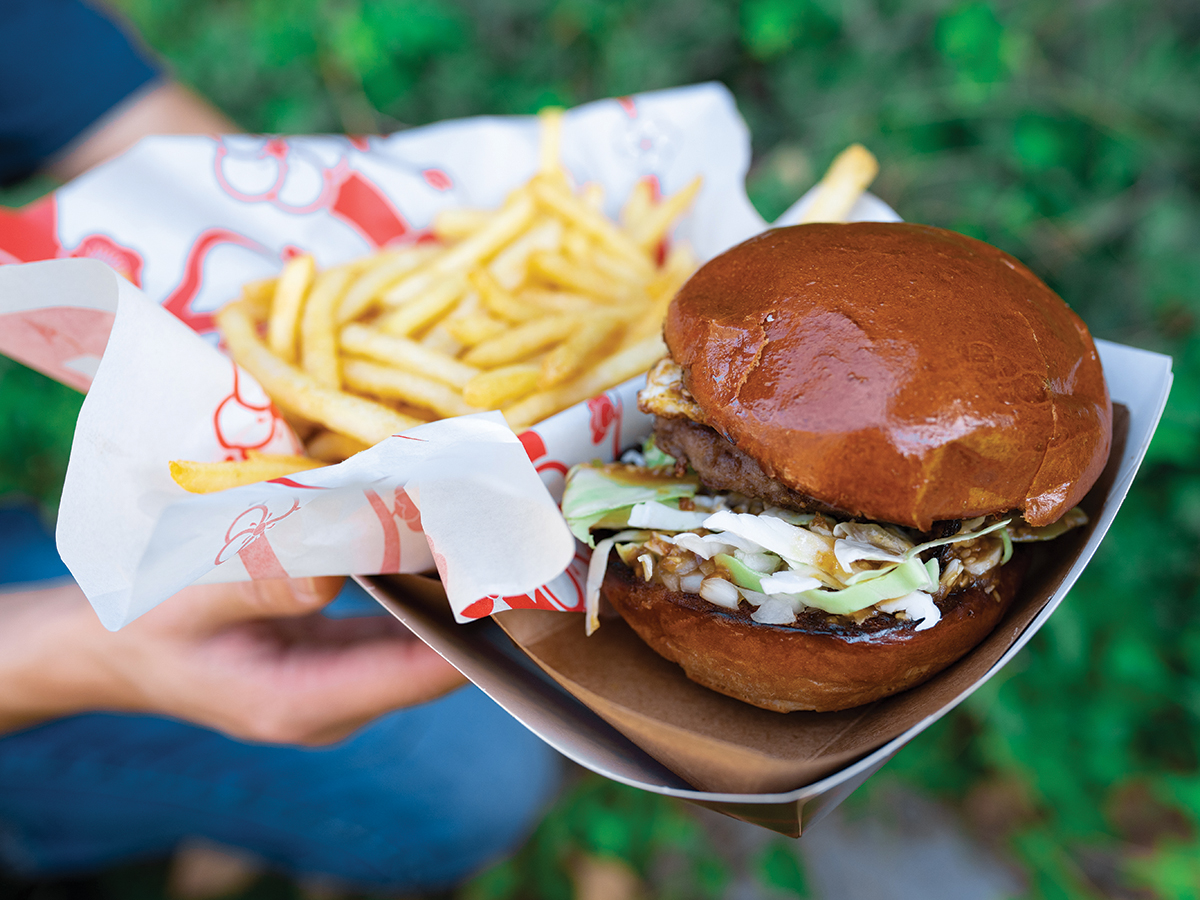 Here’s our review of the food trucks we adored and abhorred at UCR’s 2019 Fall Food Truck Festival! Hope you don’t get hungry reading it.

Served in an unassuming cardboard tub, the Chicken Mole Tacos from Oaxaca on Wheels are a serviceable little snack that might be worth picking up if you like your chicken dry and your mole sauce on the sweeter side. This dish’s charm lies in its simplicity: for $11 you can get three tacos heaped with grilled chicken and doused with Oaxacan mole sauce.

Unfortunately, said simplistic charm does leave something to be desired. As mentioned above, the grilled chicken was very dry, and might have been just a tad overcooked for my liking. The mole itself was serviceable. It ‘had a gentle sweetness to it that eases into a spiciness that sneaks up on you, but it isn’t quite worth writing home about. The sauce sits too comfortably between savory and sweet, without delivering well on either flavor.

The Food Truck Festival is a rare treat to see here at UCR, so if you usually enjoy mole tacos, Oaxaca’s might be worth a shot. They aren’t quite like any other taco I’ve had, and the bittersweet mole is certainly a culinary experience worth having if you’re curious. If that doesn’t immediately sound appealing to you, however, you might be better off ordering something else of the menu.

Okamoto Kitchen features a myriad of different options to sample for those looking to delve into a taste of Japanese cuisine. The menu provides a diverse array of samplers for a relatively cheap price to go along with a mouth-watering chicken, pork or beef burger. Okamoto also offers vegan and vegetarian options so this truck has a little something for everyone.

At $8, the Yanki burger featured a grilled beef patty, fried over easy egg, shredded cabbage topped with their sesame-infused teriyaki sauce over a crispy bun. While the burger was a bit on the small side, the oozing egg yolk blended perfectly over the fresh char of the beef patty.

For my side dish, I ordered the $4 Japanese BBQ house fries. The fries were thin and crispy and the BBQ flavor gave them a strong and powerful taste. While they were a bit salty and dry, they were still quite good to indulge in after each crunchy bite. However, for next time, perhaps ordering a milk tea or a fruity soda on the menu can help to dilute the saltiness of the fries. Overall, I would recommend this food truck to any UCR student that enjoys Japanese cuisine or even has a remote interest in trying different cultures of food.

The Middle Feast food truck’s presentation is very calm and different from the other multicolored food trucks. The truck is designed as an eye-catching cityscape but it camouflages out in the open. The only distinctions that broke the camouflage were the accolades and images of their dishes. The images distinguish what food is vegan, vegetarian and gluten-free.

The staff seemed very attentive, considering my burrito came out in five minutes. The food upon first look is very Instagram worthy. The burrito was robust with quinoa, falafel, coleslaw, cucumber and tahini dressing. Unfortunately, it was dry and nearly flavorless other than the nuttiness of the falafel. The tahini sauce felt absent even if it was visible. It was a filling option but it doesn’t prove it’s $16 worth due to the flavor component of the burrito. The overall experience of the Middle Feast food truck based on appearance, customer service, food presentation and flavor execution is subpar.

With the name “Belly Bombz,” one expects a bomb of zesty flavor when biting into its Korean-inspired wings. Instead, the food truck is plastered with pictures of soaked wings and infamous shows such as “Food Network” and “KTLA 5” that featured the business at one time.

Their successful advertising might have had students leaving with a bomb of savory flavors but also empty wallets.

At a whopping $14.07 (plus an additional 50 cent card charge), the Spicy Garlic Parmesan Platter consists of eight boneless wings soaked in a tangy orange sauce topped with shredded parmesan cheese, chopped green cilantro, and cornered with a side of coleslaw. Despite drowning in sauce, the first couple of bites leave you with a satisfying crunch. Flavor wise, the spiciness of the sauce does not overwhelm the cheese but instead enhances it, resulting in a dense, almost nacho-like taste with a spicy kick. As for plating, the coleslaw cornered at the top is a failed attempt. This idea of contrasting the wings with a fresh taste of veggies is soiled by the pool of sauce that covers the entirety of the platter.

As a result, the truck seems to focus heavily on their sauces to deliver the bomb of flavors it advertises, but its $14 price tag and half-hour wait line isn’t worth it. If the platter was less than half the original price or incorporated in a combo option, I would definitely recommend its fusion taste.

This year’s annual UCR Food Truck Festival featured an amazing assortment of hot dogs with Jojo’s Grill-A-Dog. Jojo’s provides a variety of hot dogs and toppings as well as the ability to craft your own to satisfy your hunger.

My go-to this year was the Pastrami Dog, which was prominently advertised on a sign in front of the truck. Served with your choice of dog (I chose a bratwurst), pastrami, yellow mustard, grilled onions and pickle slice for $10, the pastrami dog did not disappoint. After taking a few bites, I found myself deeply satisfied with my purchase as the brat was grilled to perfection and the accompanying pastrami and onions added to the delicious flavor.

The only gripe I could find with the dog was that the pastrami wasn’t very well packed into the hot dog causing some slight spillage. Additionally, as can be the case with hot dogs with so many ingredients packed in, the bun never tore apart or became too soggy. For the duration of the meal, the bun kept its integrity and my enjoyment of the hot dog never diminished.

Overall, despite being a bit pricey, the dog did not fail to satisfy my hunger. As has been the case in previous years, Jojo’s Grill-A-Dog delivers on quality hot dogs and a worthwhile food truck snack.

One of the more unique food trucks featured was Kono Pizza, which switches up traditional pizza by rolling it up into a cone and serving it like ice cream. After taking a look at their menu, I decided to go with the Pepperoni Cone with Jalapeno for $9.75. While the treat is most certainly scrumptious, eating one is easier said than done.

The hard pizza shell pushes the delicious pizza to the top when you bite into it which can make it overflow a little. However that didn’t stop me from enjoying the cone like pizza that really made every ingredient more tasty. Despite this, the portions are a little small, and $8 for a basic cheese cone is a little pricey. That said, the cone is filling enough as a small meal. Kono Pizza even makes desert cones with nutella and tiramisu. Overall, the truck is a fun unique take on italian cuisine that is sure to make you rethink how to eat pizza!

If you’re a fan of seafood, you probably swung by Cousins Maine Lobster Truck during the Fall Food Truck Festival. The truck was one of many that arrived on campus that day, but as soon as the windows opened, a line of people began to form. The people in the truck worked diligently to move the line along as fast as possible while still managing to be friendly to each customer. It only took me about 10 minutes to get the Connecticut Roll ($16.25).

The menu items on the truck were pricier than many of the food items that were being sold at the festival, but it did not disappoint. The Connecticut Roll’s toasted slice of bread piled high with warm, buttery pieces of lobster made for a great tasting experience. However, the portion size could have been slightly bigger. While it was great that the roll was filled with as much lobster as it could carry, there was not enough of the actual roll to balance it out.