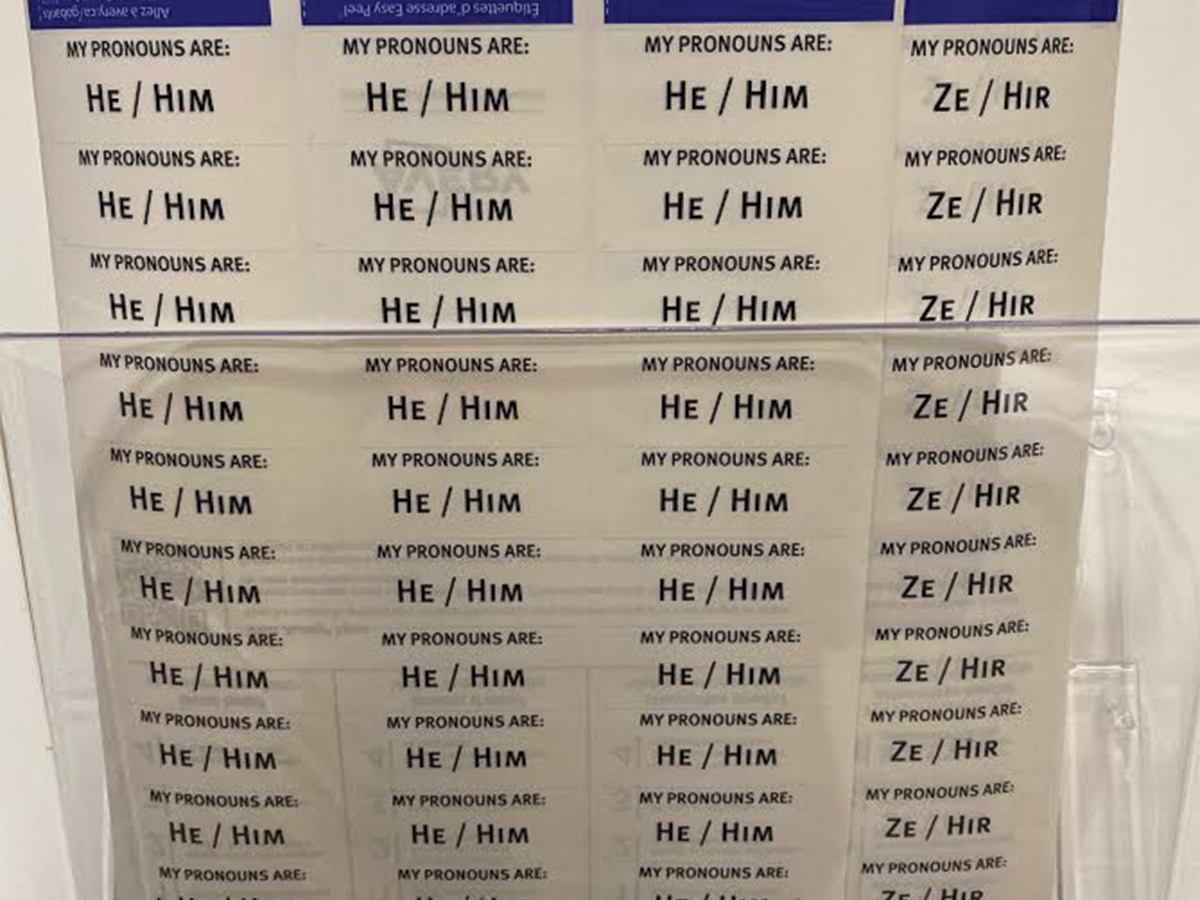 Harvard’s Kennedy School of Government has created pronoun stickers for students to place on their in-class name cards. Pronouns displayed on name cards will hold classmates and professors accountable for referring to students correctly, creating a comfortable learning environment for transgender and gender-nonconforming students. The Kennedy School of Government is the first school at Harvard to implement the use of pronoun stickers; however, many other universities are recognizing the importance of incorporating preferred pronouns into institutional documents. It’s crucial that transgender and gender-nonconforming students, who are most vulnerable to depression and suicide, can openly claim their identities and have them be reaffirmed by professors who are in positions of power.

The implementation of pronoun stickers will make students feel more comfortable asserting their preferred pronouns. In the past, students have had to “come out” to their professors at the beginning of the term to communicate their preferred names and pronouns. The implementation of these stickers would ideally reduce the need for students to come to their professors directly, minimizing an uncomfortable experience. In addition, the affirmation of preferred pronouns would encourage students to participate in classroom discussion without the fear of being misgendered when called upon.

It is important to note the link between the acceptance of transgender and gender-nonconforming individuals and emotional and physical livelihood. For transgender youth, the affirmation of their gender pronouns along with their chosen names reduces the likelihood of depressive and suicidal ideations. Massachusetts has a relatively progressive view on the rights of the LGBTQ community in contrast to many southern states. In many places, there are legal barriers that impede transgender and gender-nonconforming individuals from claiming their identities on legal documents, which further highlights the responsibility educational institutions have in accomodating name and pronoun preferences.

The fight toward creating an inclusive and equitable learning environment for Harvard students hasn’t been easy. Harvard has applied inclusive pronouns in their registration process as early as 2015, however, it remains difficult to enforce the use of stated pronouns among university faculty across the nation. A professor at Shawnee State University refused to use his student’s stated pronouns and sued the university for taking disciplinary action against him. There continues to be debate surrounding whether faculty members should be required to adhere to discrimination laws surrounding gender identity.

Harvard is only one of many Ivy League schools that have shown a commitment to creating an inclusive learning environment in recent years. Last year, Dartmouth College announced that they would allow students to select their preferred pronouns, chosen names and gender identities on official school documents. One in five Americans have reported knowing someone who identifies with pronouns outside of the she/her or he/his binary. It stands to reason, then, that the education system needs to normalize the use of correct pronouns in order to ensure that all students are comfortable in expressing themselves in their academic environments.

Ideal classroom practices may require professors to initiate sharing pronouns to foster an inclusive learning environment. Carnegie Mellon University uses NameCoach, for example, which serves to help professors in learning students’ names, pronouns and pronunciations. By mainstreaming initiatives like this, professors can share their own pronouns, while providing instruction on how to refer to others. In accommodating students’ requests to acknowledge and reaffirm their pronouns, identities become heard and known.