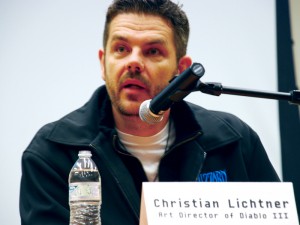 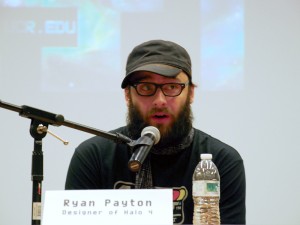 I  was met with the blaring sound of Sephiroth’s fight song from “Kingdom Hearts” and the sight of the event’s hosts all clad in Space Invaders-themed shirts as I walked into HUB 302 North on Jan. 23. It was ASPB’s Press Start event, and the room was teeming with excited students—all of them lovers of video games and eager for an opportunity to hear about how they are made from some of the minds that make it happen.

The first speaker was Edmund McMillen (designer of several hit indie games, the most known being “Super Meat Boy”) or, more specifically, the 15 foot face of McMillen, as he was unable to attend the event in-person and had to call in through Skype for his half hour Q&A. His first question involved the concept behind “The Binding of Issac” which is one of his more recent indie titles (to the unaware, indie games are those that are made without the financial support of a large company like EA or Ubisoft). He went on to tell us how it came about from his love of the original “Legend of Zelda” as well as his religious upbringing as a child.

When asked about his pursuit of art for a career,  McMillen admitted that he was at first hesitant, fearing that he’d grow to hate his art if were to become part of his job. However, seeing as he enjoyed it and was good at it, he eventually changed his mind.

McMillen backed up his claims by discussing how the producers of mainstream games are thinking strictly with business logic due to the recession, and thus they aren’t willing to take any of the creative risks that makers of indie games take. Lastly, he was asked to give some advice for any prospective game designers, to which he said that you shouldn’t get into game design to be successful, but because it is your passion. “Just have fun,” he said, “because that’s what it’s all about.”

After McMillan, gamers were treated to a presentation by UCR alumnus and current Art Director of “Diablo 3,” Christian Lichtner. The first half of his presentation detailed his progression into the video game industry. He graduated from UCR with a degree in business and from there went into comic books as an artist. Like McMillen, Lichtner said that passion was the key, so when he got to the point where he wasn’t passionate about working with comics anymore, he went on to games. A lot of Lichter’s love for games came from his love of story and that video games “aren’t just games” anymore, but the evolution of experiencing storytelling.

Lichtner then went on to give some details on the process of making a game at Blizzard (the company famous for the “Diablo” series, “Star Craft” series, and “World of Warcraft”). He started by saying that “nothing happens randomly” in a game—that every single little thing that you see on the screen, even something as little as a leaking faucet in the background, had someone create it and argue about how it should work and look. Lichtner explained how making a game is composed of design of the gameworld and gameplay, art of the visuals, programming of code, and the production that holds them all together.

He also said that Blizzard holds gameplay as the number one concern of games as opposed to trying to show off the latest tech. Then, when it comes to art, Lichtner and the rest of Blizzard believe that stylization always wins over realism. He talked about how constant iterations and reworking is needed in order to create a game that hits the ever-changing target of what is fun. Finally, he left with the idea that the future of gaming is centered on building communities and bringing people together.

The last speaker was “Halo 4” and “Metal Gear Solid 4” designer, Ryan Payton, who gave a presentation of his own that he humbly named “20 Life Lessons From a Talentless Hack Like Me.” With the first two, Payton talked about how he got a job with the video game company Konami purely by being proficient in Japanese and willing to take whatever job he could get on the game journalism site 1Up.com. The next two again touched on the importance of doing what individuals are passionate about. Payton showed great dedication with his work on “Metal Gear: Portable Ops” and even stuck with Konami when Xbox Japan offered him more money. These two displays of love for the Metal Gear series landed him his dream job as a lead designer for “Metal Gear Solid 4.”

From there his lessons turned into general advice on getting into the industry and advancing. Payton stressed that self-promotion can be annoying and conceited, but it is also truly invaluable. He also made it a point to say that going to where you can make an impact is integral to getting work. He said that it is a good idea to keep in touch with professors and other like-minded individuals, that you should be spending time doing things that will help your career as opposed to waste time, and that you should probably watch 2010’s “The Social Network,” just to get an idea about how careful you need to be in dealing with lucrative projects.

Payton’s last pieces of advice were focused on looking towards the future. He talked about trying to find new things to do with game design and trying to base controls more on people’s natural tendencies when given a game to play. Payton also reminded us to take advantage of the many opportunities that now exist, like Kickstarter.com, which Payton’s game studio, Camouflaj, is using to fund their new stealth game for iOS devices, “Republique.” One of the last lessons he had to give was to never stop learning, or as he said, “Once you’ve learned everything there is to know about something, move on to learn something else.”

The event was then wrapped up by Lichtner and Payton holding a Q&A of their own. They were asked if social networking should be as wide or as focused as possible, and they answered that it was far more beneficial to create small and deep connections with those who are like-minded. When asked about advice for a writer getting into the business, they made it a point to stress how much you should practice and practice until you can make your ideas work, because as Lichtner put it, “Ideas are a dime a dozen, but execution is everything.” Many of the audience began to leave during and after the Q&A, but many more enthusiastic fans stuck around for signatures and conversations, which Lichtner and Payton were gracious enough to give well past 10:30 p.m..

If there was one theme that ran throughout the entire event and one thing that anyone wanting to make a career in games should take away from “Press Start,” it would have to be passion. All three of the speakers professed their love for the medium of videogames and how they all got to where they are today largely thanks to the drive such love inspired. Stick to what you know, stick to what you are good at, stick to what you love, and you may just find yourself leveling up in the world of video games.