Highlander
Home Radar Concerts and Live Performances Welcome Home! Harry’s back in LA with his Love On Tour! 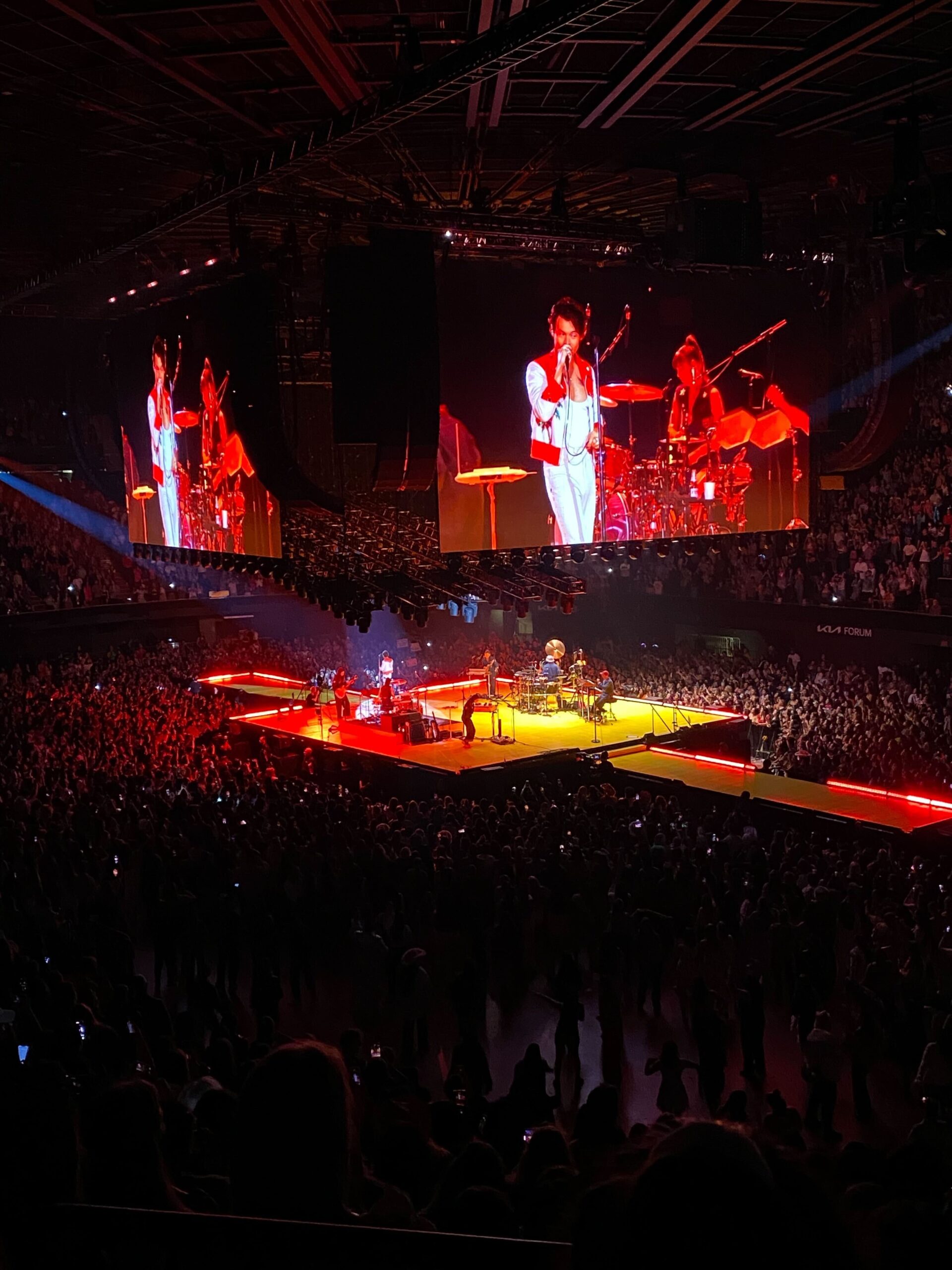 Harry Styles made his return to the Kia Forum, with fans filling up nearly every seat of the seventeen thousand available to see his first show last Sunday. The Forum had been transformed into Harry’s Love on Tour with colorful lights, specialty drinks and fans dressed in pink feather boas, creating a unique environment that left me brimming with excitement.

While performing, Harry was quick to dance and frequently interacted with his fans. He would layer hats and clothing that fans threw on stage, as well as always aiming his mic towards the stands so the crowd could sing along. Harry found a perfect balance of fan interaction while putting on a fantastic and unique show.

While I noticed he seemed a bit nervous at first, this faded as Harry took over the stage with his dancing. He moved around the entire stage throughout his performance, waving and smiling at fans between lyrics. Between songs, Harry would frequently check in with the crowd, talking with fans and making sure everyone was enjoying themselves. Around halfway through the set, Harry asked everyone to bring out their signs so he could see, telling jokes and giving warm replies to the audience. Harry eventually noticed one fan holding a small sign that said “help me come out.” Quickly taking the initiative, Harry, utilizing a pink feather boa a fan gave him, told the fan that they would officially “come out” once he put the boa up over his head. Moving the boa up and down while fans created a drumroll, Harry eventually threw the boa into the air as the crowd erupted into a cheer, creating a heartfelt memory and letting that particular fan come out in the most special way possible.

All of Harry’s songs inspire movement, forming a smile and demanding dance from every listener. Although, no song got the crowd quite as loud and energized as “What Makes You Beautiful.” As One Direction’s most famous song, the crowd immediately burst into a frenzy with many fans crying and even sobbing as Harry sang. One of the more interesting parts of Harry’s performances were his transitions between songs. Harry’s audio team did an amazing job at mixing in his upbeat and slower tracks, creating smooth and unique transitions that always made us wonder what he was going to play next without losing his rhythm.

Before attending this event, I personally was not a huge Harry Styles fan. I enjoyed his latest album “Harry’s House,” but only really listened to a few of his songs beyond that. After watching him put on an amazing show that truly connected with his audience, I began to appreciate his work so much more. While nearly all of his concerts entail large venues packed with people, Harry creates a connection between his audience only seen at much smaller venues. Harry Styles’ concert at the Kia Forum proved that he is a natural-born performer.