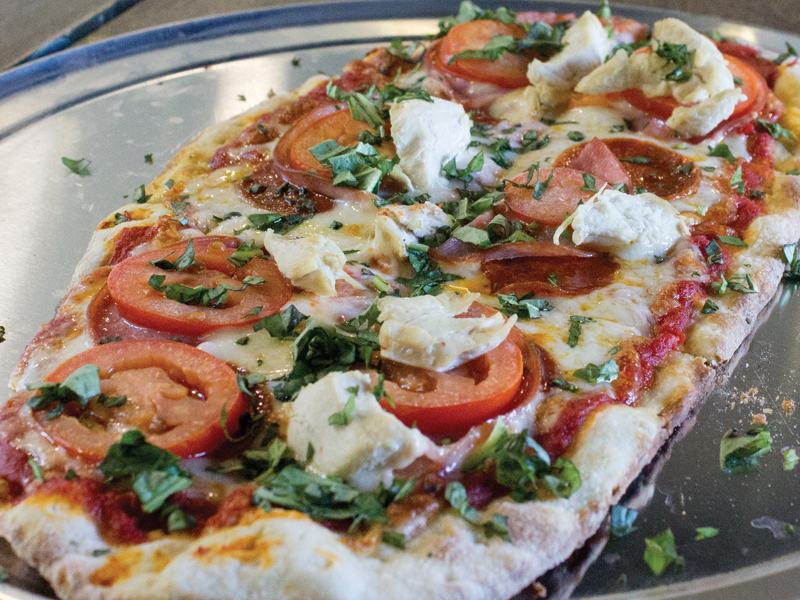 With just a short walk down University Avenue, the University Village is the perfect getaway for students to lose themselves in a movie at the theater or already plan out winter break at Starbucks. And, as the clouds find their home over R’side for the season, the University Village offers another warm roof for everyone to settle under — about 450 degrees warm to be exact — with its newest addition: Oven 450 Pizzeria.

I found Oven 450 snuggled in between Lollicup and 7-Eleven. The ladder outside and darkened “Open” sign made me question if it was open to the public yet. However, fresh paint fumes mixed with crisp flatbread taunted my nose, and drew me closer to realize they were indeed open. I made my way past the two gentlemen enjoying their pizzas on the outside patio, into the periwinkle blue room the size of a classroom in Sproul Hall. The cherrywood bar along the wall encircled the two tables in the center: all of which were empty. I bobbed my head to the indie station on Pandora radio, which played overhead as I peered over the menu. Since the main attraction was the “Build Your Own Flatbread” for $6.75, I had no hesitation for my selection. The build-your-own feature allowed guests to choose three meats, cheese, three veggies, and a finish.

I approached the white marble pizza station. One of the servers intricately placed disks of dough into the pasta machine, repeating the motion about three times until it was flattened into a pizza canvas. He slid it to the next server who awaited the first stroke of the masterpiece: sauce. From the choices of alfredo and marinara, I chose alfredo and believed asiago cheese would pair well. From that point, I decided to create my own take on a white pizza. With over five choices of meat (including shrimp and pork), I chose chicken, sausage and ham.

The server stared at the cheese-coated dough, like solving a chemistry formula in his head. When I asked what he was doing, he explained they like to spread out the toppings perfectly to get all of them in each bite. And with that, he scattered all of the ingredients. He followed suit with my vegetable selections: mushrooms, tomatoes and red onions. As he swooped the loaded dough onto the pizza pan, I stopped to remind him to add the “finish” (to make sure I got the full effect, of course). He said the finish literally finishes the meal after it is done baking in the oven — which made sense since all finishes were frail greens (green onion, cilantro, kimchee) that could not easily withstand 450 degree flames clawing at it. Finally, the checkout lady rang me up as well as took my name and finish: basil. She encouraged me to take a seat, where she would deliver my finished masterpiece.

I decided to climb the bar stools to enjoy my meal, and, before I could almost topple over, she presented me my food with a giggle. I looked down to see a foot-long beast of a pizza for one. Nobody could finish this by themselves. But with the corners browned with shreds of cheese and tomatoes adorned with ribbons of basil, I peeled away the first square. The first bite embodied every ingredient it intended, which hit every taste bud to make my mouth water. The server did not miss an inch, as each bite carried a refreshing character of basil and red onion while balancing the rich and nutty flavor of the asiago and alfredo. The flat bread snapped and crackled between my teeth as if it was in the oven once more. I did find that chicken was a bit on the bland side, but concluded it was merely boiled chicken with no seasoning so as not to disservice the rest of the ingredients. The sausage was more like crumbles of peppered beef and the ham was honey-baked deli ham. Without a doubt, the best part was the grouping of basil, red onion, tomato, and asiago cheese. Basil offered a clean taste with the sweet red onion and tomatoes to cut through the rich nutty flavor of a creamy cheese and sauce. Needless to say, I conquered that beast.

By the time I got to the third piece, chatter in the room started to rise louder than the flames in the oven as more and more guests filled the line and seating. I noticed most used the menu as their destination, ordering mostly the Mediterranean (alfredo, shrimp, asiago, tomatoes, garlic powder and basil) and Korean (BBQ sauce, pork, red onion, kimchee, sesame seeds and green onions) pizzas. While most items on the menu were covered with the sign “Coming Soon,” customers took advantage of the available pizzas all at the price of $6.75 — besides the vegetarian option of $6.50.  As I chewed, I debated on what other offerings would work well together, and the wilder part of my imagination came up with a concoction using the toppings of eggs, cucumbers and peas. And for those who want more than pizza, a salad menu (also with a build-your-own feature) is in the works, as well as “finger foods” like hot wings and a dessert menu of sweet pizzas.

While it seemed like just a small room waiting to be filled when I entered, the restaurant was entirely packed when I left. I’m predicting that in the cold months coming up, the pizzeria won’t just be a place devoted to toasting pizza dough, but a toasty haven for hungry students to hang out at as well. Oven 450 is now fully open, and greets every customer with a warm flame and crisp crust.