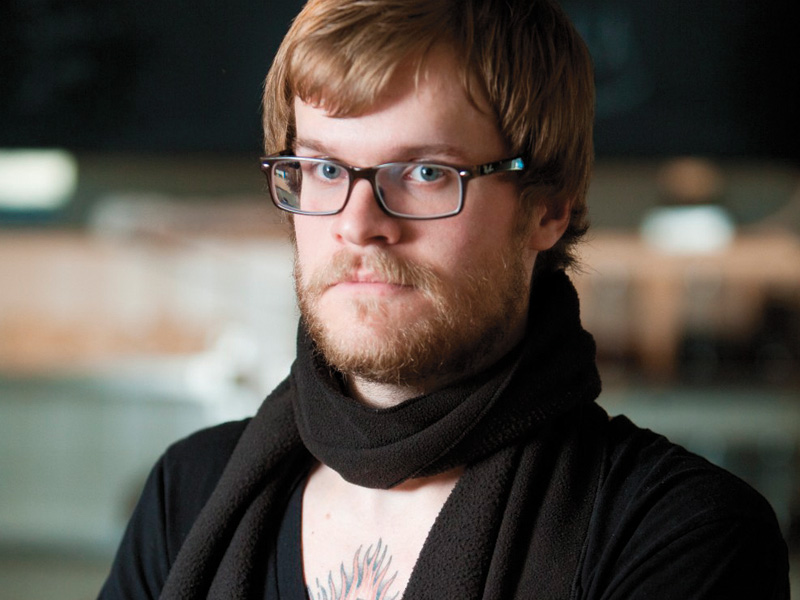 The voice erupted in front of me like a squirt gun to the heart. I looked up and saw a man that could only be described as svelte, a word which I have never spoken but have read many, many times. It means “(of a person) slender and elegant,” and this man — in his slim-fitting jeans and black turtleneck — was all lines and right angles.

He said nothing. He sat across from me and stared out the window with his chin in his pale palm. I coughed. I did not remember inviting him to sit. He took out a Moleskine notebook and a stainless steel flask. He took a deep pull of whatever liquid sloshed within it and coughed, violently. I blinked. You can’t drink booze at Starbucks. I should tell him that.

“I’m a rulebreaker,” he said, and planted the flask next to my latte. He tipped his chin toward my too-expensive laptop and spoke roughly, whether from the whiskey or the coughing I couldn’t tell. “You’re a writer?” he said.

“We writers attract each other in any public space. Like magnets,” he said.

I quietly shut the cover of my Mac.

He tapped the cover of his notebook with an untrimmed fingernail. “Self-published. Something of an entrepreneur. I write noir, if you will.”

Noir. The way he said it shuddered in my mind like a war cry. He did not pronounce it as the French might, with a gentle guttural rumbling over the “o” and the “i,” nor as I might, with a hard “r” to finish struggling through the unfamiliar pairing of “oi.” He finished the word with a “wah,” so it sounded like a thin sheet of metal flapping in the wind — nwah, nwah, nwah.

“What makes it noir?” I said. “Gunshots and fedoras?”

He cleared his throat. “What are labels, anyway?” he said. “I write noir. Mostly explorations of lightness and darkness and the human condition. Of crime and betrayal and love and hate. It’s all very gritty.”

I sipped slowly from my cup and quietly began collecting my things. “What are you working on now, then?” I said.

He flipped open his notebook to the middle. Each page was blackened by cramped writing that reached and dipped past lines, meandering and climbing and then tipping into the center to form a dark, misplaced abyss. “A story told entirely in stream of consciousness about a boy walking through a tunnel in search of his father, and he thinks the light at the end is him, but in reality, it’s a train.”

“Where’s the grit, though?” I said, slipping my bag over my shoulder.

He cleared his throat. “It’s more noir-ish. Consider the endless pursuit of honor, the truest pursuit of happiness, the meta-discussion of the reaches of literary fiction, propelled by every turning of the page.”

“You could say that,” he agreed, rubbing his notebook against his face so the ink smeared his cheeks into a blurred, black smudge. “You could say it’s noir.”