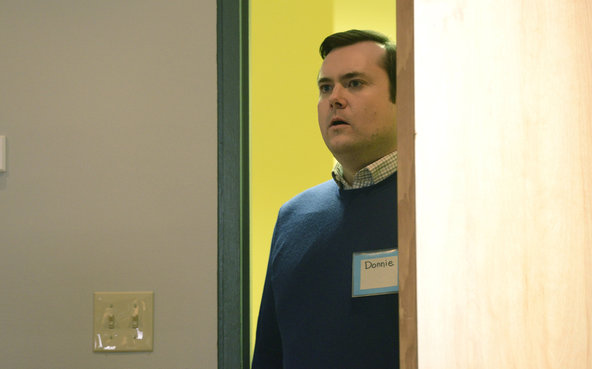 If you’ve been reading these “Orphan Black” reviews carefully, it’s likely no secret that of the clones, I’m the most interested in Alison (Tatiana Maslany). I’m not sure why that is exactly, but I think part of it has to do with the fact that Alison might have the most to lose.

Because being a clone and having a home and family life like the perfect one Alison wants aren’t very compatible, the clone thing tends to mess up Alison’s very normal life in ways that it doesn’t upset Sarah’s (Maslany) largely on-the-run existence and Cosima’s (Maslany) life as a student. Yes, we have to keep in mind that there is a very real danger of death with both Sarah and Cosima, which is less prevalent in Alison’s plotlines, but Alison’s world is crashing down around her while Sarah has finally found a semblance of family with Cal and Kira and Cosima is at least able to keep her science and Delphine – for now.

Because I’m so interested in Alison, I was pre-disposed to liking “Knowledge of Causes, And Secret Motion of Things” because it’s so Alison-heavy. It also helped that the episode reminded me a lot of previous Alison-heavy episode, season one’s “Variations Under Domestication.”

In “Variations Under Domestication,” Alison’s home life collided with her clone life when she became convinced Donnie was her monitor – no one thought she was right about Donnie at the time – and tied him up in the basement on the same day as the neighborhood potluck. Hilarity ensues as she and Sarah try to keep up the appearance that everything is a-okay with Alison’s house.

“Knowledge of Causes, And Secret Motion of Things” covers a lot of the same territory as “Variations Under Domestication,” but it takes the drama and heightens it, as much of season two has done.

When Alison finally lets Vic (Michael Mando) in by telling him she let Aynsley die, he calls the police officer he’s reporting to, and Alison overhears. We get a very brief but devastating glimpse of Alison’s hurt face once she learns of Vic’s betrayal before the opening credits. Alison continues to trust people in her life, it continues to hurt her and I wish she could find one person to confide in that won’t betray her.

Luckily, I suppose – I’m still having a hard time forgiving Felix (Jordan Gavaris) for leaving Alison on her own at the beginning of the season – Felix has been there for Alison since his return, so she does have his help, and Felix knows just how to deal with Vic – by dangling Sarah in front of him.

Alison and Felix get Sarah to come see Vic at rehab, where it turns out he wants to apologize. And of course, he also wants to get back together with Sarah. I’m still having trouble figuring out why the writers wanted to bring back Vic when it seems his plot has been pretty much used up, and this scene exemplifies that problem by rehashing the old relationship stuff on Vic’s part when we know Sarah has moved on.

But the genius of this plotline is that Alison’s conflict with Vic just happens to coincide with Family Day at the rehab center. Like “Variations Under Domestication” before it, “Knowledge of Causes, And Secret Motion of Things” slams a normal, mundane event together with the possibility that the cloning project will come to light. And it also happens to force Sarah into pretending to be Alison.

Maslany is the greatest thing to happen to this show, and while she proves that every episode, it’s particularly evident when one of the clones has to pretend to be another one of the clones. The Sarah-as-Alison parts of this episode are hilarious, and they also highlight Maslany’s performances.

See, Alison volunteered to give opening remarks and to demonstrate a role-playing exercise for Family Day, and because everyone thinks Sarah is Alison, Sarah has to take up the reins. She manages to imitate Alison’s stiff demeanor during the opening remarks, but the role playing proves too much for Sarah and Maslany shows this brilliantly. As Sarah’s grip on Alison’s persona slips, her accent, demeanor and pronouns – she keeps talking about Alison in third person – also slip, just enough for her behavior to be weird but not too suspicious.

Of course, not everything can be fun and games, so “Knowledge of Causes, And Secret Motion of Things” has its tense moments too. These are often balanced out, if not overshadowed, by how enjoyable the funny parts are, but the tense moments do serve to keep the plot moving.

Mrs. S and Sarah tell Rachel (Maslany) that her father is alive and that Dr. Leekie (Matt Frewer) is the one that killed Rachel’s mother. This leads to a scene between father and daughter during which Rachel cries. Although this isn’t the main focus of the scene, it’s by far the most powerful element. We get to see that even though Rachel as all this power and seeming control of the knowledge that she’s a clone, it has still affected her life just as negatively as it has affected the lives of her fellow clones.

Once Rachel finds out about Leekie’s misdeeds, she cuts him off, stripping him of his power at Dyad, and he has to go on the run. It’s bad luck that the person who finds him first is Alison’s husband, Donnie (Kristian Bruun).

After the fun and games of Family Day, Donnie runs into Sarah and Alison at the same time, and the jig is up. Alison thinks he already knows all about the experiment, but as Cosima pointed out once, it’s probably a “double-blind” where neither the clones nor their monitors know exactly what’s happening. When he finds out that Leekie lied to him, Donnie goes after him with a gun, and like Alison’s problem with Aynsley, someone – Leekie – ends up accidentally dead.

After last week’s claim that Leekie was the real villain of the story, this seems like a bold move, but Dyad already has another potential villain moving into place – Marion Bowles (Michelle Forbes), Rachel’s boss. We don’t know much about her yet, but I like the idea of the ultimate villain being a woman since all of the main characters are also women.

Once again, Cosima is relegated to the background – although this looks like it’s going to change next week – but this time, her plot was important, rather than simply a worsening of her illness. She goes through with an invasive medical procedure – one that’s reminiscent of the procedure the Proletheans performed on Helena – to try to deal with the cancer in her uterus. This involves injecting stem cells into the polyps, stem cells that she finds out came from Sarah’s daughter.

Although it’s only a small part of the episode, Cosima and Sarah then have to decide what to do about the stem cells because the ones that Cosima is using will run out soon. This means that they’d have to obtain more from Kira. Without the cells, Cosima will die. It’s a dilemma that’s been woven throughout the season and is just now coming to a head, which is a storytelling technique that “Orphan Black” does well.

Whether the stem cell problem will ultimately matter for Cosima, however, is up for debate because next week, her health takes a turn for the worse. I expect between that and the fallout from Leekie’s death, there won’t be any room for fun and games.