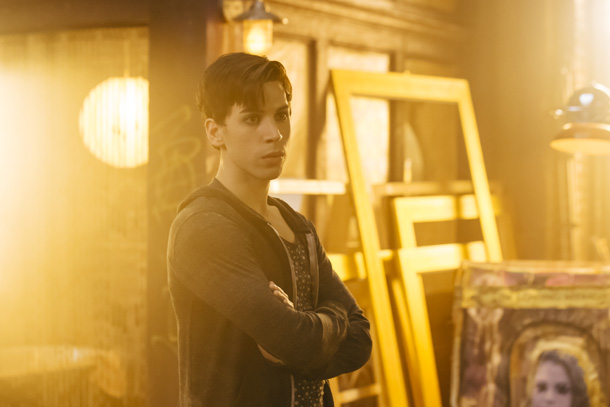 It’s been difficult doing reviews for a show like “Orphan Black” because so much plot is jammed into each episode that it’s hard to decide what are the most important things to talk about, but this week, I’m having the opposite problem: I can’t decide what to talk about because nothing felt particularly vital.

“Variable and Full of Perturbation” is the eighth episode in a ten-episode season that has so far been chock full of twists and surprises. By all rights, this episode should be ramping the conflict up another degree, preparing us for the season finale. Instead, most of the conflict takes a back seat this week.

While “Variable and Full of Perturbation” isn’t exactly a bad episode of television, it’s ultimately not a good episode of “Orphan Black.” It comes across more like filler than anything else, and with how busy season two has been, there shouldn’t be an episode that slows down as much as this one.

You could say that this episode is simply moving more pieces into place. One significant development is that Duncan goes to work at the Dyad Institute at the end of the episode, a development that is intended in part to help Cosima (Tatiana Maslany) with her illness by allowing him to work on the synthetic sequences in the clone DNA and taking away her need to rely on Sarah’s (Maslany) daughter Kira’s stem cells for treatment.

However, the argument that “Variable and Full of Perturbation” is about moving pieces into place would work better if the episode had spent more time on this. Instead, the episode is largely about introducing us to new clone and trans man Tony Sawicki (Maslany). “Orphan Black” has already established that the clones can have different sexual identities, so why not different gender identities as well?

The show seems respectful in its attitude toward Tony – Felix corrects Art when he uses “she” pronouns for Tony instead of “he” pronouns – and as far as I can tell, the show would like to take the same attitude toward gender identity that it takes to sexual identity, as exemplified in the second episode of this season, when Cosima tells Rachel, “My sexuality’s not the most interesting thing about me.” The characters on “Orphan Black” have never been defined solely based on their sexuality, and this should extend to Tony and his gender identity as well.

However, the episode backs itself into a corner. Cosima, Delphine and Felix all have identities as characters separate from their sexuality – Cosima and Delphine are the scientists, Felix is Sarah’s foster brother – and these additional identities are important to the plot of “Orphan Black.” While the show acknowledges that the characters’ sexual identities are important, it also knows this is a science-fiction show about clones, and each character must contribute to the overall narrative arc of solving the clone mystery, regardless of what other traits they have.

But Tony spends much of the episode in the dark about the other clones, even though he had met Beth before she died. While “Orphan Black” professes that Tony’s gender identity isn’t “the most interesting thing” about him, the episode does make it the most interesting thing. Tony is stuck passing the time with Felix, during which the two share a flirtation during which the writers purposefully call attention to the similarity in appearance between Sarah and Tony on multiple occasions.

I can’t think of a real reason why Art and Felix couldn’t have told Tony about the clones – Art says Tony is sketchy and possibly can’t be trusted, but later, Felix calls Sarah over to talk to Tony without any reservations – and Tony’s reaction or lack of reaction to this news could have been his major through-line for the episode.

It is particularly clear that the writers didn’t quite know what to do with Tony. At the end of the episode, he simply gets on a bus at Art’s request and leaves town. I doubt we’ll see him back before the season is over – though with “Orphan Black,” anything is possible. Felix gave him a clone phone before he left, so we may see Tony again in season three. Hopefully, if or when Tony returns, the writers will have a better idea of how to integrate him into the plot arc of the season.

“Variable and Full of Perturbation” also spends a lot of time with Cosima at the Dyad Institute. I’ve said before in these reviews that the reason we haven’t gotten as much time with Cosima this season is because her plotline largely hinges on her illness, which is progressing slowly and in a way that can’t be televised effectively.

In this episode, however, Cosima gets some breathing room. Yes, she’s still sick, and we see her cough up blood into a tissue. But Cosima also gets a chance to be herself again.

In what was easily my favorite scene of the night, Cosima outplays the other scientists in the lab at a fantasy board game called Runewars. Instead of being “the sick clone,” Cosima reminds everyone that she is not only incredibly smart but also incredibly nerdy.

This re-humanizing of Cosima’s character works well, particularly when paired with her reveal to her lab partner, Scott (Josh Vokey), that she is subject 324B21. Lest we forget, Cosima is not just a number, not just a lab experiment. She is also a person, and the board game scene reminds us of that.

The reminder couldn’t come at a better time either. Cosima has a seizure at the end of the episode, an episode that spent a good deal of time focused on the fact that Cosima’s treatment must come from Kira’s stem cells and that the most effective course would be to get these cells from Kira’s bone marrow.

Using Kira’s bone marrow would be highly invasive for Kira and would also put her within Dyad’s grasp, but without a better course of treatment, it’s possible Cosima will die. While “Variable and Full of Perturbation” doesn’t come down in one way or the other, it looks like the next episode – and possibly the season finale – will deal with this issue. I don’t want Cosima to die, and I doubt the writers do either, but I’m not sure at this point how they will keep her alive.

Finally, the episode deals with Donnie (Kristian Bruun) in the aftermath of Dr. Leekie’s death. It’s a little surprising that the episode isn’t more concerned with the death. After all, Dr. Leekie was a fairly big part of the show, and given that his death was the twist ending of last week’s episode, the fact that “Variable and Full of Perturbation” barely talks about it is strange. However, we’ll get more of the aftermath of the murder next week.

This week, Leekie’s death is more of a catalyst in bringing Alison (Maslany) – fresh out of rehab – and Donnie back together as husband and wife. After a heart-to-heart in which they both admit to their accidental killings, the Hendrixes are back on the same page for the first time in a while when trying to figure out what to do with Leekie’s body.

While I wish we could have gotten a sense of how rehab changed Alison, I was glad to see Alison getting a chance to be her old self, like Cosima. She chastises Donnie for his poor job of wrapping up Leekie’s body and for using her gun to commit the murder. I expect the gun thing will matter by the end of the season, but in the episode, it’s played for laughs. Since I doubt anyone will be laughing at the next two episodes, I’m trying to be okay with this for now, even as it scares me – as far as we know, the police are still investigating Alison.

In the end, “Variable and Full of Perturbation” may have achieved a kind of balance in the clones’ screen time – it seemed to me that Cosima, Rachel, Sarah, Alison and Tony had similar amounts of on-screen time – but the problem with the episode ultimately lies in its lack of balance between characterization and plot.

Sacrificing narrative momentum to simply spend time with your characters can and should be done over the course of a television season, but “Variable and Full of Perturbation” sacrifices too much narrative momentum in a season that hit the ground running in episode one and has rarely let off the gas pedal since.