Highlander
Home Radar “Orphan Black: Things Which Have Never Yet Been Done” Review 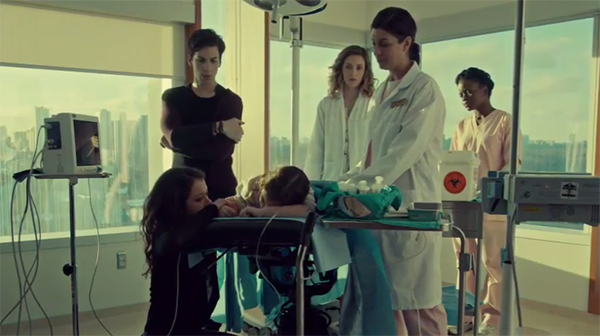 Now, that was an episode of “Orphan Black.” Unlike last week’s episode, “Things Which Have Never Yet Been Done” was firing on pretty much every cylinder, and the writers managed to mix important character moments and important plot developments far more effectively than they did just one week ago.

Most of the mixing together of character and plot is able to happen because Cosima, Sarah and Rachel (all played by Tatiana Maslany) converge in the episode. Since Cosima is only getting sicker, Delphine – on Rachel’s behest – approaches Sarah about harvesting some of Kira’s bone marrow to provide a temporary stop-gap while Cosima and Duncan start research into the clones’ genetic sequences.

While, of course, all of these developments were important to the plot, this section of the episode was also incredibly emotional as Sarah had to ask her daughter to undergo an invasive medical procedure. Multiple times over the course of the episode, Sarah breaks down in tears over the choice between helping Cosima and trying to keep her daughter out of Dyad’s clutches.

The most emotional of these scenes is also the most important in terms of the themes of the show, i.e. choice, particularly over matters of one’s own body. When discussing whether Kira would give bone marrow to Cosima, Mrs. S points out that it’s not for them to decide. They ask Kira if she’ll do it, making sure to stress the fact that she doesn’t have to. It’s far more of a choice than anything the clones have been given, even if in the end, it’s not much of a choice since it’s this or let Cosima die.

But the most shocking and interesting part of this plotline is how even though Sarah and Mrs. S do as much as possible to keep Kira out of Dyad’s way while Kira undergoes the procedure for harvesting her bone marrow, they ultimately fail. The reason this is most interesting is largely because it hinges on Rachel as a character. While we’ve seen Rachel’s façade many a time over the season, we still haven’t gotten much insight into her, but in “Things Which Have Never Yet Been Done,” Rachel’s façade cracks.

Rachel seems to realize that she will never be as “good” as Sarah – not to Dyad, who wants to research Sarah to figure out why she can have children and not in Rachel’s own mind, which was upset last week by the information that she couldn’t have children of her own. With that knowledge, Rachel finally pulls out all the stops to get what she wants and kidnaps Kira. No more negotiating.

It’s unclear exactly what Rachel wants to do with Kira since they already have her bone marrow, whether Kira will be used for research, as a bargaining chip to get Sarah to come to their side, or for some other purpose. But it’s still scary when Rachel says, “You may even grow to like it here, just as I did.” If the fate Rachel envisions for Kira is one similar to her own, we should want Kira out of there as fast as possible.

Also dealing with the theme of choice in regards to one’s body in “Things Which Have Never Yet Been Done” is Helena (Maslany), who hasn’t been seen since episode six. This is one indicator that the writers have had trouble with the timeline of the season – on top of things like the time jump early in the season and the progression of Cosima’s disease. There’s no reason Helena should have been gone that long, not when the show wants her to be a central character, but it’s good to see her back.

Helena undergoes a medical procedure of her own in the episode – implantation of her fertilized eggs – but while Kira’s operation is emotional because it’s sad, Helena’s is emotional because it’s utterly terrifying. Helena may have had made this decision herself, but it’s clear that she doesn’t know what she’s getting herself into – she doesn’t even know what a cervix is.

She also doesn’t know exactly what she’s getting into with Henrik (Peter Outerbridge) and the Proletheans. It’s not exactly surprising that Henrik is the father to Helena’s children, mainly because it feels like a plotline I’ve seen before, but the episode still earns the horror factor here when it has Henrik impregnate his daughter Gracie (Zoé de Grand-Maison) with Helena’s babies as well  because he feels a duty to introduce as many of Helena’s children to the world as possible, since he sees her as a miracle – with the added horror that Gracie didn’t want to be pregnant.

In keeping with her fractious relationship with Helena to date, Gracie almost relishes revealing the dark side of Henrik’s plans, but the tables turn deliciously when Helena tells Gracie, “If you don’t want to have my babies, don’t have my babies.” In so doing, Helena restores to Gracie a sense of personhood, which is the deciding factor in their relationship.

Suddenly, Helena and Gracie are working together to escape from the Proletheans, and it works far better than I expected it to. Even though Henrik catches them in the act, Helena attacks him and lets Gracie escape.

In a sequence that’s in many ways equally as horrifying as the scenes with Henrik implanting the eggs into Gracie and Helena, Helena revisits the same treatment on Henrik – she stabs him with the needle –then burns the Proletheans’ farm to the ground. It’s a bold move on Helena’s part, not that we’d expect anything else, and I’m wondering how this will come back to bite her, as so many of the clones’ decisions in “Orphan Black” do.

With the sheer horror and emotional toil of the Helena and Sarah/Rachel/Cosima plotlines, Alison’s plotline in “Things Which Have Never Yet Been Done” is a welcome relief. Of course, the subject matter isn’t a relief since she has to deal with getting rid of Leekie’s dead body. But at least it’s done in a comical manner.

Surprisingly, for a husband and wife who were barely keeping the marriage together a few weeks ago, Alison and Donnie (Kristian Bruun) work well together. Or they get the job done anyway – with some scolding from Alison, naturally.

It’s nice of the show to revisit just how willing Alison is to keep her family together, and her efficient handling of Leekie’s corpse showcases it perfectly. She may not have done this before, but she soldiers through better than Donnie, working the jackhammer and looking at human brains with an ease Donnie doesn’t have.

But what makes the plotline fresh and not just another stream of Donnie as a terrible husband who can’t do anything moments is the way Donnie steps up when Vic and Angie come around to threaten the family.  He scares Vic into submission with a gun – safety on because as he tells Alison, “I learn from my mistakes” – and takes a blackmail photo of Angie and Vic working on non-official police business in case they ever try to use the fact that Alison killed Aynsley against them.

It works, not only as a plotline, but also as a balm to Donnie and Alison’s marital problems, and while it may not last, the show took the right step in allowing us to see just why these two would have gotten together in the first place.

Next week is the season finale of “Orphan Black,” and if the show keeps on the same track as “Things Which Have Never Yet Been Done,” it’s going to be one wild ride. I only hope the varying plotlines of the season can all be tied up in an adequate manner during that one final hour. I guess we’ll see.