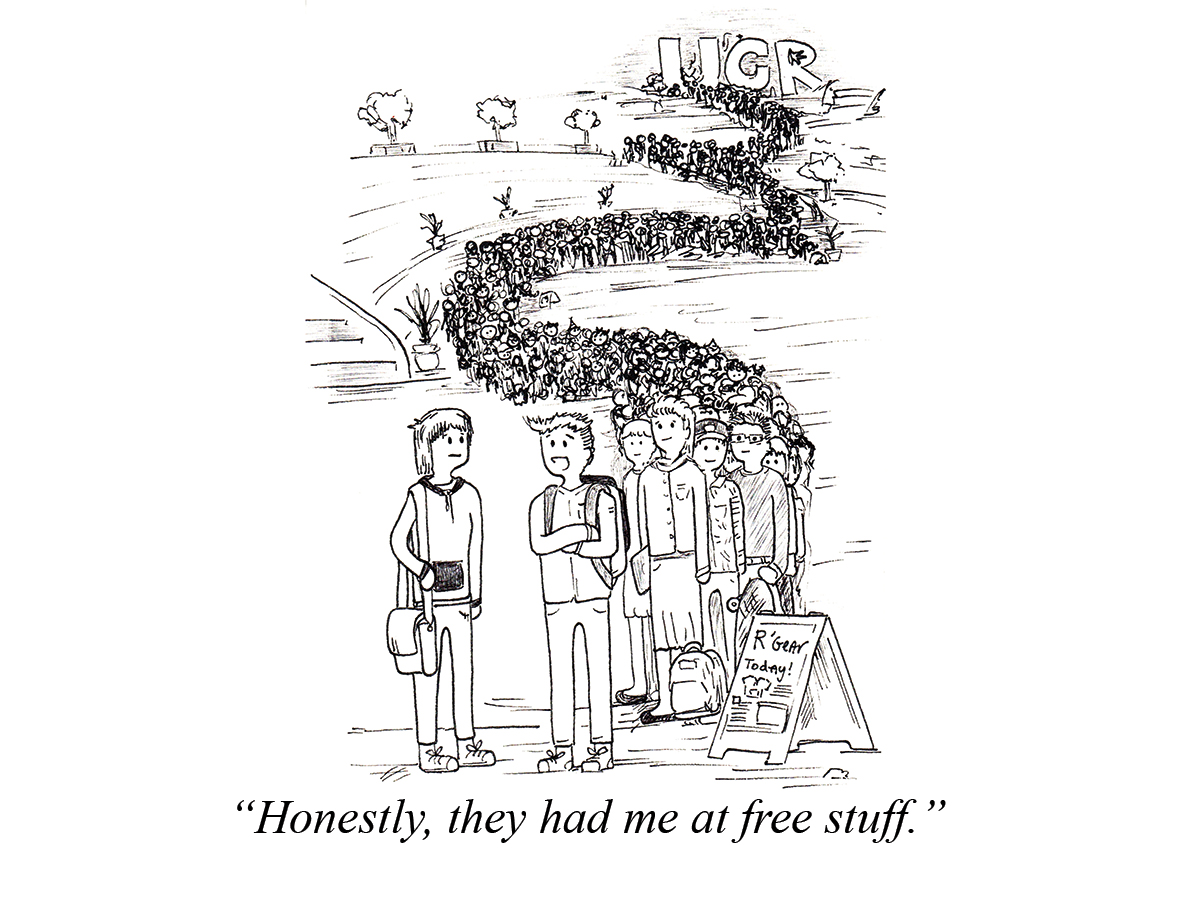 In relation to these two truths, the R’Gear initiative seems like a stroke of genius. It caters to college students’ two big weaknesses while simultaneously promoting a positive agenda of encouraging school pride.

Last week, ASUCR distributed sweaters emblazoned with our school’s initials and Scotty’s familiar face. Although the sweaters required no payment, students compensated through social media posts with the hashtags, “#iloveUCR,” “#RGear” and “ASUCR.” Regardless, there was an extremely high demand and ASUCR ran out of sweaters by the second day.

It’s simple to gauge how effective the R’Gear initiative is by simply looking around campus and counting how many students are still wearing the sweaters from last year. Even though most students only bother to claim the sweaters because they’re free, the initiative is still fulfilling its agenda of promoting school spirit and unity.

It’s no secret that UC Riverside has a rather dismal reputation in comparison to other UCs. It has been nicknamed “UC Rejects” or “UC Redemption” by many, and a free sweater won’t solve this issue. However, as a current student, I find it empowering to see my peers wearing UCR apparel. They’re declaring their school affiliation despite the ridicule it receives. It reassures me that not everyone dreads attending UCR.

Additionally, having numerous students milling about clad in UCR apparel also promotes an image of unity toward people visiting the campus. An image of a united student body, proud to wear clothing declaring their school affiliation could potentially influence prospective students’ decision to attend UC Riverside out of genuine want and not simply out of unfortunate circumstance.

While the initiative is effective in that aspect, it still possesses shortcomings that must be addressed. Last year, ASUCR faced criticism because of the program’s cost and specialized attention toward the incoming freshman class. While the latter was resolved with the production of a class-neutral design, there are still issues with the former.

Sure, reducing $21,000 in costs sounds impressive, but a closer look at the numbers shows that this reduction might not be solely the result of deft business maneuvers.

Distribution for the sweaters was intended to take place over the course of four days but ended abruptly after two days. While the premature conclusion of distribution could be attributed to high demand, the main culprit was probably manufacturing oversight. ASUCR simply did not produce enough sweaters to cater to the entire student body.

Over 20,000 students are currently enrolled in UCR, and only approximately 3,000 sweaters were distributed — less than the amount distributed last year considering each one of the 4,000 incoming freshmen could have received a sweater, with some to spare for upperclassmen. Granted, producing sweaters for the 20,000-plus students enrolled at UCR is an unreasonable request. However, in his report to the senate, Vice President of Finance Shafi Karim indicated that each sweater cost less than $9 to produce, less than what it cost last year. It probably wouldn’t have hurt to increase the order, especially since, according to a finance report by Karim, 5,761 students out of 6,456 of the students ASUCR surveyed supported the continuation of R’Gear and this year’s sweaters were intended to cater to every class. The scarcity of sweaters prevents people who are busy during peak distribution hours from claiming one for themselves. Though the sweaters are free, the time investment of waiting in line is huge and some people can’t afford it. Consequently, something meant to be accessible for everyone becomes unattainable.
The R’Gear initiative is definitely a clever way of bolstering school spirit; however it would probably be more effective if more students had the chance to participate. But hey, maybe I’m just bitter because they ran out of sweaters before I could claim one.