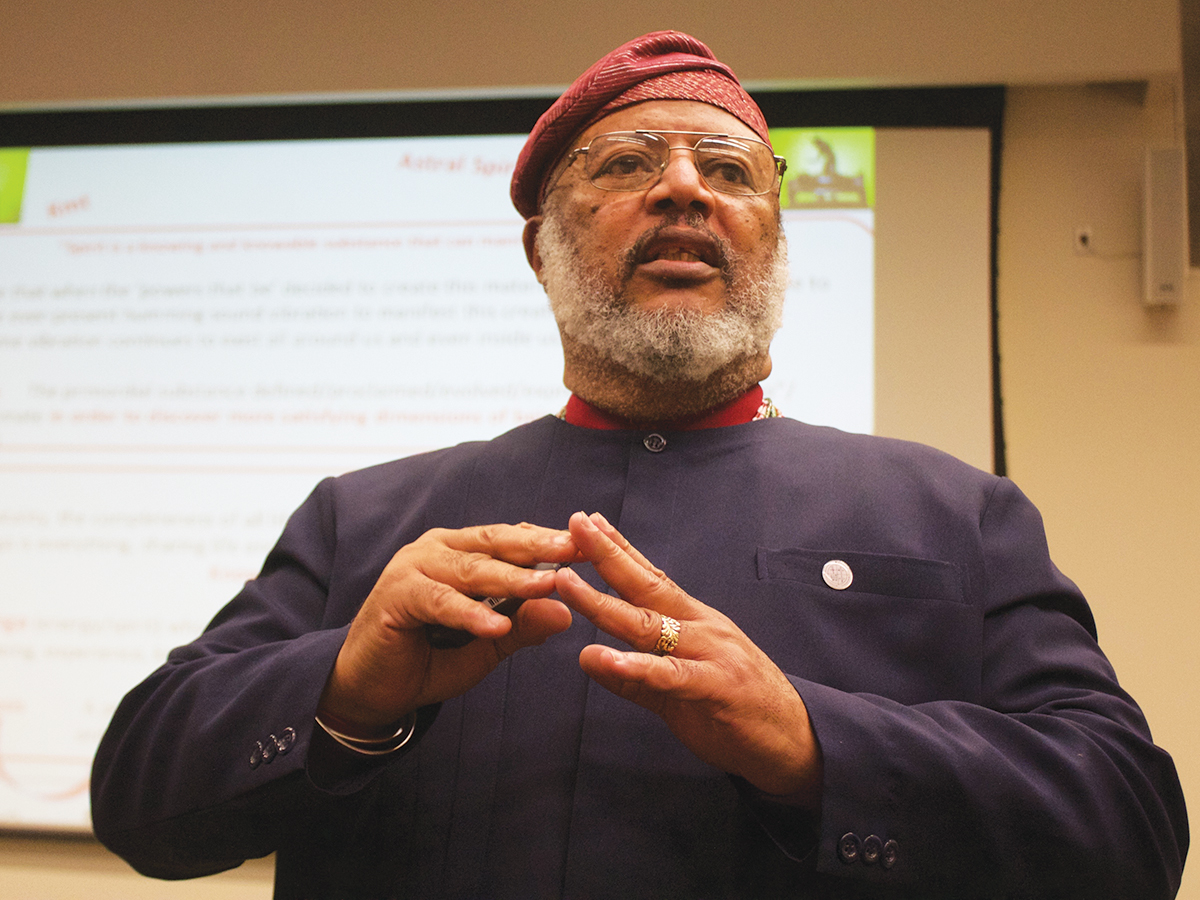 San Francisco State University (SFSU) professor emeritus Wade Nobles gave a lecture on Jan. 19 entitled “Yesterday is History, Today is a Miracle, Tomorrow is a Mystery: History is the Key to Unlocking the Mystery of the Miracle.” The lecture, held for a crowd of 60 in HUB 302 South was hosted by UCR Psychology Professor Carolyn Murray as part of the Black History Month Lecture series.

Nobles is the current director of the Institute for the Advanced Study of Black Family Life and Culture Incorporated (IASBFLC), in addition to his prior professorship at SFSU’s Department of Africana Studies. The goal of the IASBFLC is to improve and develop minority communities through research and strategic planning, with a special emphasis placed on family life and education.

Nobles began by discussing certain historical traditions and values the people of the Bantu Congo (spelled in his presentation as BaNtu-Kongo) — where Nobles states that most of the enslaved Africans hailed from — held in regards to education and family life and how they can “help black families in a toxic and anti-humane society.” In addition, Nobles contrasted the history and cultural values with the Eurocentric historical narrative which students are generally taught in the public education system.

“I want to take you on a conversation about wisdom and intelligence that ain’t necessarily from this day and time,” Nobles began. “We, including me, have been taught all our education about one voice or one narrative about one story, but there are other stories in the world. We need to begin to look at these other stories so that we can interrogate them and understand what they say about people and their humanity.”

Nobles then described a “Genesis” for African history in which “the primordial substance defined/proclaimed/evolved/expressed as homoprimates in order to discover the most satisfying dimensions of being a person,” elaborating that “It (humanity) ain’t about possessions, it’s about exploration.”

In discussing education, Nobles described how the young also have an important role in teaching their elders, as opposed to their elders being the sole distributors of knowledge. “In our tradition as Africans, it (education) is a circle in that the old teach the young and the young teach the old,” Nobles described, stating that they have wisdom that can help their teachers become better thinkers.

He then contrasted many different ideals between Western and African cultures beginning with conceptions of reality. For a Western society, Nobles argues that the material world, primacy of the individual and domination shapes their reality, whereas an African reality is based on the spirit, interconnectedness and collectivism.

The lecture then discussed the stereotypes of the black family which consist of “Deadbeat dads, welfare moms and delinquent kids,” to what he defines a real healthy black family, which “is historically, culturally biologically bonded and whose relations to each other are governed by a particular set of cultural beliefs, historical experiences and behavioral practices.”

After the lecture, Murray opened up time for a Q-and-A session. One student from Murray’s class asked, “I was never taught about black history, it makes me upset I don’t know anything about it … Why don’t black families talk about that?”

“We don’t tell our story because it’s painful and Western culture denigrates black history,” Nobles elucidated, taking a moment to explain how his own parents refused to discuss their history as a way to protect him. “We gotta fight for our story.”

This lecture was the first of the Black History Month Lecture series for Feb. 2016. The next lecture will take place on Tuesday, Feb. 9 in Olmsted 1208 at 6:30 p.m. The lecture will be entitled “Under the FUBU is a Guru: Genius, Activism and Meaningful Black Manhood,” and will be hosted by Adisa Ajamu the executive director of the Atunwa Collective, a think-tank located in Washington, D.C.