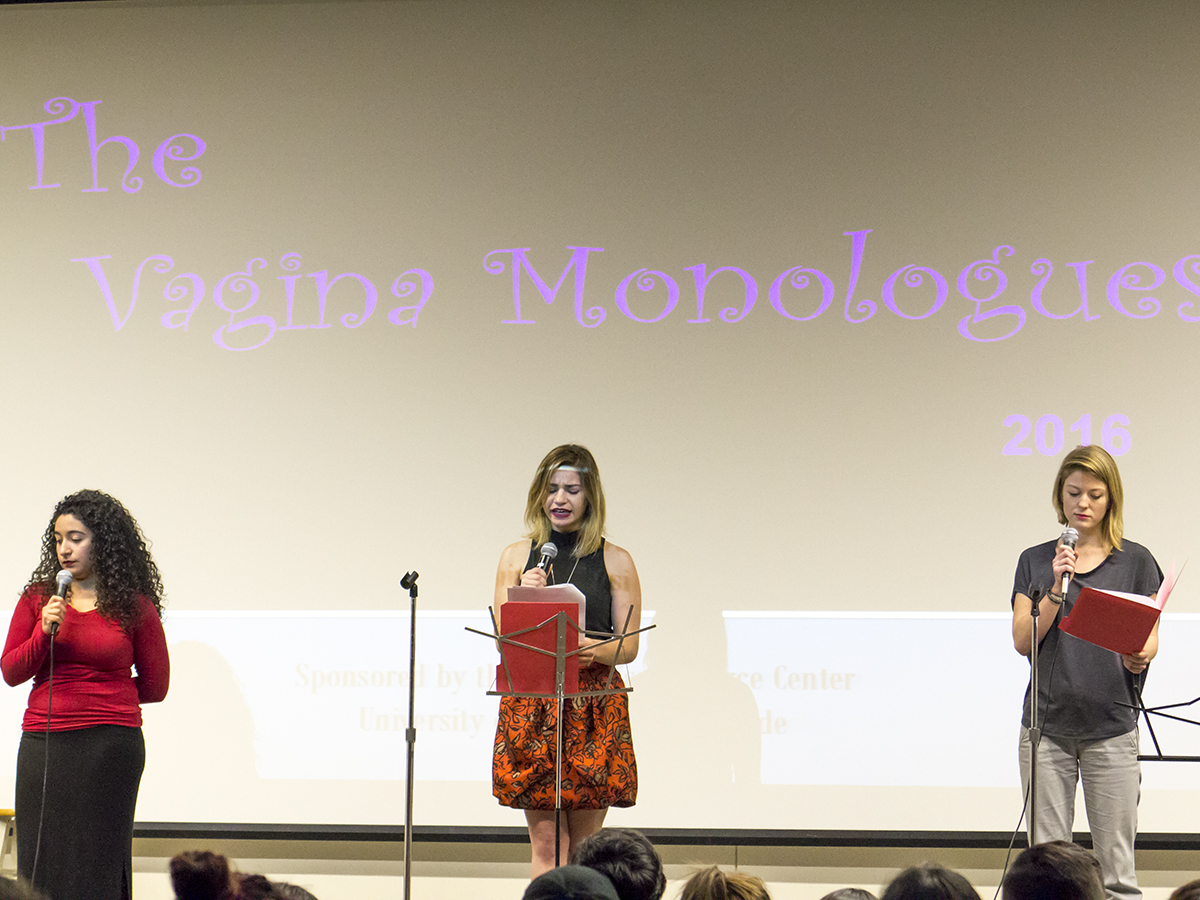 When these three words, more or less, were separately spoken as part of the show’s introduction, you could tell that the evening was going to feature a nonstop show of radical empowerment. This was especially true when the night’s hostess Kris Moisa went onstage and asked everybody if they’re comfortable with the word “vagina,” to which everybody raised their hands. Excited about the audience’s enthusiasm, Moisa noted that, “Before we say vagina, we gotta work our way up,” before noting, in increasing lengths, the first three words.

Taking place in HUB 302 and sponsored by the Women’s Resource Center, this event was a triumphant celebration of the female form; or perhaps more appropriately, of vaginas.

Right off the bat, the show put its foot down as “we were worried about vaginas” rung in the audience’s ears during the first sketch, “We Were Worried.” There were many things to be worried about: what people thought about them, if women even thought about them at all, if women had the time to take care or look at their own. Like three Greek muses, the opening performers established from the get-go that the monologues would be about vaginas and say “vagina” with unapologetic confidence.

The humor continued to be paved with “Hair.” A solo performance featuring Cheyenne Mata, the character recounts the days when her husband was disgusted by the hair she kept in her pubic region. The skit was powerful in highlighting the hypocrisy surrounding how sexuality is often favored to be more pleasurable for men. This is shown after the speaker and her husband have sex after she lets him shave her vagina. “There was no protection, there was no fluff,” Mata’s character noted. “I realized then that hair was there for a reason.” The sketch’s tone is lighthearted, yet the hypocrisy is still shown.

A few of the sketches revolved around clothing, in contrasting tones. “Wear and Say Lists,” performed by the trio of Taryn Parks, Lorely Martinez Romo and Marina Sangh, described three vaginas and what they’d each be wearing and saying. The answers ranged from “glasses,” “pink boa,” “a tutu” to “jeans,” “pearls” and “sweatpants.” Their answers to “What would your vagina say?” were equally as random, but they all agreed on “slow down.” It was a more abstract sketch, but the silliness again allowed the characters to fully embrace the multi-dimensional nature of female sexuality, and that if dicks can afford to have some fun with the imagination, then so can vaginas.

In stark contrast, “My Short Skirt” was much more direct in its message. Taking place in the middle of act two, it immediately pounced upon patriarchal society with the solo character pronouncing “my short skirt is not an invitation.” While “Wear and Say Lists” used the idea of clothing one’s vagina to playfully comment on the bright side of empowered sexuality, “My Short Skirt” was less abstract and much more real, as the character runs through a list of how her short skirt helps defy rape culture by words alone. The character is more somber as she exclaims, “My short skirt is a defiance. I will not let you make me afraid.” The character holds fast against those who would victim-blame her for rape or assault with courage, and in the end the courage prevails as she proclaims, “But mainly, my short skirt — and everything under it — is mine. Mine. Mine.” The audience clapped at the end, and several even stood up and cheered.

“The Flood” brought some humor with another solo story, this time featuring Alana Anguren. The story centered around the Brooklyn-accented character’s memories recalling the time she had a “flood” stain a date’s car seat. After that, she’s turned away from her own sexuality, fearful for what it might bring. The light-hearted tone subtly masked the darker content, which related to “Hair” in its exploration of how women throughout history have been told to be disgusted by their own sexuality and the consequences of that.

“The Flood” set the tone for several of the closing sketches in the first act, including “The Vagina Workshop,” “Vagina Happy Fact,” “Beat the Girl” and “Because He Liked to Look at It.” “The Vagina Workshop” revolved around a British woman as she discovers herself merely by becoming interested in her vagina, after thinking for so long that “it existed on an abstract plane.” “Vagina Happy Fact” recounted, in purely scientific terms, how wonderful the clitoris can be, proclaiming, “It is the only organ in the body designed purely for pleasure.” “Because He Liked to Look at It” tells a wonderful tale of female sexuality coming to fruition, and while “Beat the Girl” held a much more somber tone as three transgender characters opened up about their degradation and humiliation that many transgender women suffer on a daily basis, it, too, ends on a bright note, as these three were able to survive and fully transition.

Much of the second act was dominated by a darker tone, with a sketch that took center stage being “My Vagina Was My Village,” performed by Taryn Parks and Martha Pineda. Recalling the Balkan Wars, the sketch is played out with one character recalling only happy memories of wartime, while the other juxtaposed the rose-tinted thoughts by describing a rape of an incredibly graphic and violent nature. The dichotomy was powerful in illustrating the point about how women are often overlooked as victims of unspoken war crimes. The sketch also eerily spoke to current events in the media — particularly the farce regarding how many saw (and continue to see) Bill Cosby as an innocent man, versus those who understand who he truly is.

However, much of the lightheartedness was recovered in act two, as several sketches returned to a brighter tone when discussing empowerment. “Reclaiming Cunt,” performed by Andrea Decker, attempted to inscribe within the audience the power of reclaiming a word often used as one of the worst insults. Decker does so by phonetically examining every letter in increasing gasps and shouts, which ended in a cataclysm of sound that brought the audience to tears from laughter. The short sketch deserved a full round of applause, and it received just that.

“The Woman Who Loved to Make Vaginas Happy” was another extreme vocal exercise as Noelle Parker went down the line of how women moan during sex, ranging from “the almost moan” to “the uninhibited militant bisexual moan.” Much was exaggerated, of course, but the spin fell in line with many of the night’s previous sketches — that female sexuality comes in a diverse range.

The play culminated with “Revolution.” It begins with a stark statement: “My revolution begins in the body. It isn’t waiting anymore. My revolution doesn’t need approval or permission. It happens because it has to happen.” The play is around 20 years old, and to fight for 20 years without a radical revolution against misogyny is 20 years too late for society. The performers — Nadia Amokrane, Andrea Decker and Martha Pineda — knew that the times are a changin,’ but it wasn’t enough to wait for it. The very last words nearly command the listeners to change: “Go ahead. Love.”
The play ended with mass applause and cheers as the full cast took a bow. As I left, I could feel the crowd’s buzzing energy. If the performance seemed perfect, that’s because it may have not been just a performance in the first place.