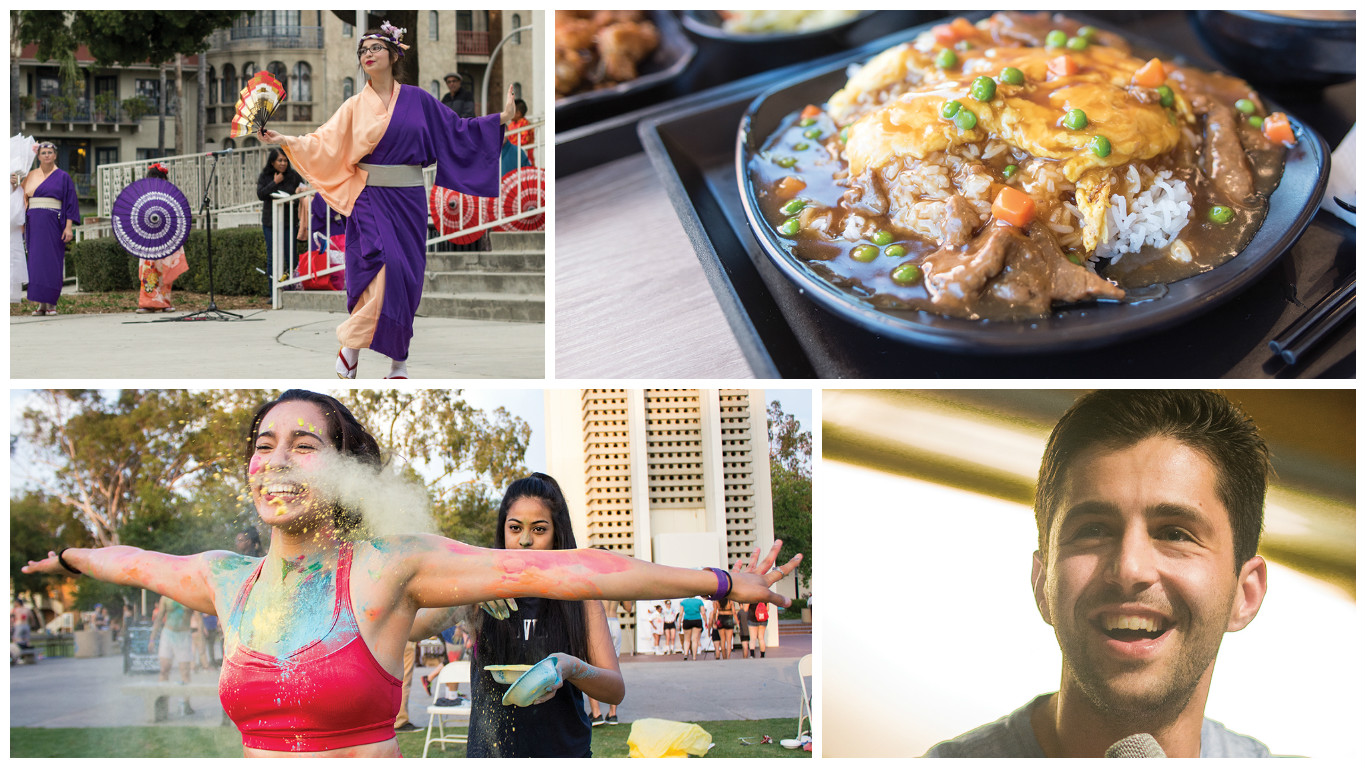 The 2015-2016 year in features was loaded with diverse and captivating events as it is every year. However, this time around, new adventures in taste tests and restaurant reviews made way as us on the Features team diffused coverage to both the delicious and not-so-delicious that local eateries had to offer and created its first restaurant review video.

As UCR is prominent for inviting famous celebrities across different platforms in previous years — from the voice actors from “The Legend of Korra” to the notorious rapper Lil B  — it continued its noteworthy podium with actor Josh Peck, sex education guru Laci Green, BuzzFeed’s “Try Guys” and the cast of “Orange is the New Black.”

In addition to there being fun events, there were also some festivities that deserved a celebration longer than one day. UCR was lit up with vibrant colors and decorations several times this year with the Semana de la Raza, which was dedicated to spreading awareness of Chicano and Latino contributions in America, and Middle Eastern Week, which consisted of events such as a culture night, open mic night and a panel about being a minority in America to embrace Middle Eastern culture.

The Highlander was able to cover some exciting events off-campus as well, such as Riverside’s annual Lunar Festival and the Tamale Fest. The Lunar Fest not only featured traditional Chinese lion dancing and firecracker celebrations but also invited the Yuujou Daiko, which performed traditional Japanese taiko drumming, showcasing the invigorating energy from the harmony of cultures.

The Highlander was able to cover some exciting events off-campus as well, such as Riverside’s annual Lunar Festival and the Tamale Fest.

While the previous three festivals were more culturally related, Riverside’s Tamale Festival was more closely a celebration of food in general and community. Not only were the endless possibility of tamales displayed — those of which ranged from feta cheese and brown tomato to sweet corn flavor — but a county fair-like atmosphere was also omnipresent. Cultural performances such as traditional Mexican dances taking place on Market Street and children running around to the music of live bands served to capture the essence of Riverside’s broad diversity in one family park.

A major theme for UCR in 2016 was acceptance, as ground-breaking events such as the Undie Run, Drag Ball and Abilities Ball emphasized the importance of loving yourself. As the only event of the year that allowed students to freely strip down to their undergarments and run across campus, the annual Undie Run, hosted by ASUCR, celebrated body positivity and self-love. A much more flamboyant showcase, yet in agreement with the Undie Run’s message, the 13th annual Dragalicious Drag Ball, coordinated by the LGBTRC, highlighted the significance of being fearless in showing who you are to the world. It consisted of an exuberant dance show with 16 unique and entrancing drag queens and kings as well as a walk-off competition with volunteers from the audience.

A major theme for UCR in 2016 was acceptance, as ground-breaking events such as the Undie Run, Drag Ball and Abilities Ball emphasized the importance of loving yourself.

The Fifth Annual Ability Ball not only embraced students with disabilities as important and crucial people to our campus but also showed off the talents of these students, such as Roshan Akula’s highly-schematic ability to recall the day of the week given any date in history or the future. It was truly an impressive year in events as we learned to love one another and accept ourselves for our differences in the process of doing so.

Inching away from the events covered in Features and leaning toward the endless possibilities that exist within its “close-to-home” mentality, 2015-16 was also a big year in restaurant reviews and taste tests.

Owing to our superb video team, we were able to produce our first video restaurant review, which was of the new Manna Grill restaurant in the University Village (UV) . It was eye-opening to be able to go behind-the-scenes at the restaurant and see how the food us hungry college students regularly order is made. We were even able to talk to the owner Mike Cho and learn what considerations are put into forming a new restaurant aimed to cater to low-budget college students. Manna Grill boasts hefty portions alongside meager prices, making it a can’t-miss destination for UCR’s students.

With a large variety of restaurants already located in the UV, it was due time for a new desserts cafe to settle in as well. For those looking for refreshing treats to cool down with over this summer, Sweet Daily offers a myriad of chilled goods such as their alkaline-ade beverages and delectable shaved ices. Otherwise, if you simply have a large fondness for sweets like me, then Sweet Daily will more than likely be able to satisfy your cravings with their endless options of fluffy cakes, stuffed churros and luxurious pastries.

Riverside should already be popular for the amount of tasteful Mexican restaurants it boasts but if not, then it will be once everyone has experienced the pure delight of dining at El Patron. Though it may be considered a bit out of the way from UCR –– located in downtown Riverside –– it is definitely a must-visit spot for its massive burritos, tacos and nachos. If the large portions and inexpensive prices aren’t enough to buy your attention, then visit El Patron simply for its intimate Mexican ranch-like setting and experience.

The staff at the Highlander can all unfortunately agree that the long-anticipated arrival of Popcorn Chicken –– a Taiwanese restaurant located in the UV –– was not worth the wait. Considering the restaurant itself is named Popcorn Chicken, we were thankful that at least that dish was delicious and juicy enough. Other than that though, we found a majority of the other dishes to be rather tasteless. Upon several more visits back, we’ve come to the conclusion that the flavoring of their dishes is much too inconsistent. Still, if you’re ever craving something small and fried for just under four dollars, you can’t go wrong with their popcorn chicken.

Little had I known that reading a handful of strong reviews for Woodfire Cafe would only lead to disappointment in the quality and taste of their items. True to their name, they revealed a rather impressive wood fire oven, which we can attribute to the one decent option they offer –– their pizza. Even with the savory and cheesy pizza, the drive to downtown Riverside still left us with an unsatisfied stomach as we were dished out with otherwise measly portions and mediocre flavors.

If you have ever tried Szechuan-style foods, then you know how incredibly risky it can be for some to consume considering how famous it is for its numbing spice. Bashu is no exception to this as its array of dishes lives up to its Szechuan name, which is a pro. However, there are also many cons to be expected here since other than the flavor of spiciness, all of the dishes were otherwise rather bland. Bashu could learn a trick or two from the flavor gods to add a bit more variety to their menu items, rather than offering only tongue-numbing dishes.

…we can’t wait to make the ever-expanding Features section as colorful and extensive as it can possibly be in the 2016-2017 academic year.

We’re more than overjoyed to be a part of a section that covers an endless assortment of topics and ideas. Just as we anticipate a bright new school year with new events and new beginnings, we can’t wait to make the ever-expanding Features section as colorful and extensive as it can possibly be in the 2016-2017 academic year.