We all know that the start of the New Year is the only time you can get in shape. I mean what is a better condition for running and dieting than the cold winds of January? It’s not like there is a season where the temperature is mild and vegetables are fresh and abundant. And besides, that would be too easy, and easy makes you weak. Remember, as the wisest of men once said, “Work it harder, make it better, do it faster, makes us stronger.” Still, to the uninitiated, the dangerous realm of fitness can seem daunting. But that is where I come in; I shall be your guide on a step-by-step journey through this strange world. So just sit back, relax, and let my expertise wash over you.

Step #1: Observe Your Surroundings.
When you first arrive at the gym, the sheer amount of running shoes you see and constant crinkling of water bottles you hear may take you aback. Fear not though, there is always an abundance of those who have undergone the holy Ritual of Resolution, although they come in a few varieties. There are the First-Timers, a rare species you can identify by their wearing of jeans. There are the Obviously-Very-Importants who mainly workout their fingers on their cellphones and their counterparts The Artists, who take the time to upload mirror pictures to their Instagrams and Facebooks as if any of their friends actually care about them. You would do best to avoid all of them. In fact, avoid everyone; obnoxious chit chat is for the movie theatre, not the gym.

Step #2: Get on the Treadmill
Now then, one of the most common sights for a gym is a row of people mindlessly running and staring at TVs like brainwashed hamsters. These are the treadmills—wonderful devices that you should really take advantage of. They’re a great way to spend a lot of energy while not actually going anywhere, serving both as a great workout as well as a grand metaphor for life. Get ready to stand in line though, this attraction is almost as good as the Dumbos at Disneyland and always seems to build up just as long a line during the first weeks of the year. Just remember to be patient and avoid the urge to kill the two or three jackasses in sweat pants that just walk for twenty minutes. Also do not concern yourself with any women that choose to wear a gallon of make-up to the gym for they are obviously just trying to attract creepy leers to get them to run faster and really break a sweat. After all, there is nothing as sexy as looking like a Geisha in a hurricane. 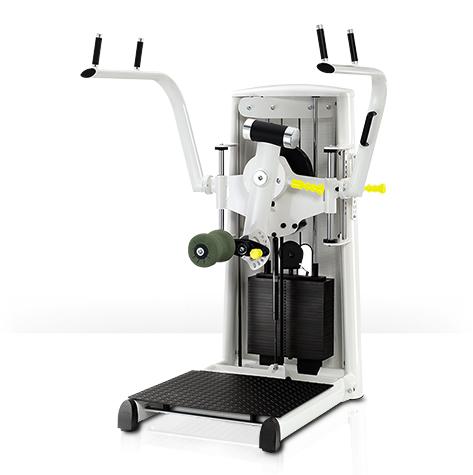 Seriously, what the hell does this thing do?

Step #4: Brave the Weight Room
Ah yes, the Weight Room, where there is enough loud grunts and clanging of metal to make you think you have stumbled into a Rammstein concert. Here you will find the natives of the gym, the tribe of #TeamGetSwoll. They are a rambunctious group that seems to derive satisfaction from the constant action of picking objects up and putting them back down. Join them in their strange practice of constantly picking things up, but do not engage in their conversations of “sets” and “protein,” else they will know you are not one of their own. For if that happens, you must assuredly suffer the torture that they bestow upon outsiders: unwanted advice! You will get bogged down by information detailing what muscle group is where, and which one you should feel tension in, which is only slightly less horrible than water-boarding. So keep your head down and let your muscles do the talking, for your own sake. There are some forms of wrath in this world no person should have to be subjected to. 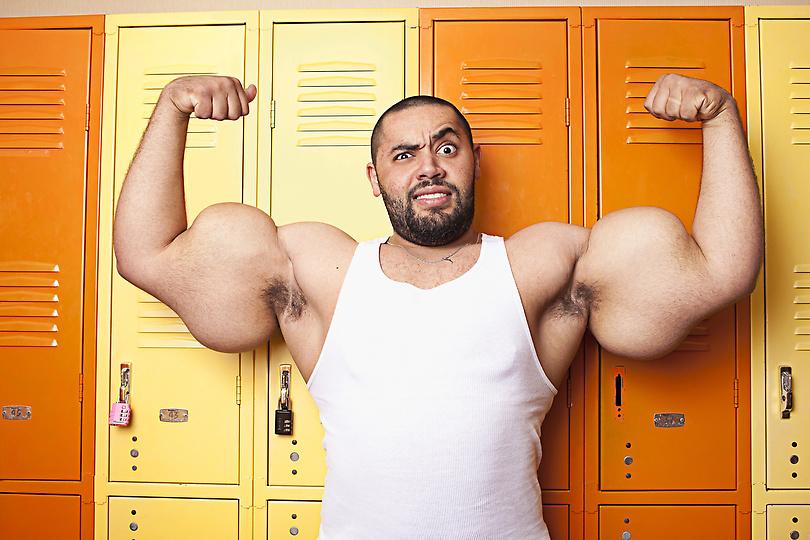 “You jealous bro? You jelly? Yeah, you’re jelly. You’re so jelly, your name is Smuckers.”

Step #5: Be Consistent
It must have been terrifying to get in and out of the jungle alive just once, but you have to dive in it again and again. You will notice that as the weeks go on, less and less people will show up, having lost faith in their Ritual of Resolution and awaiting the give-it-a-go-again in twelve months. Don’t be one of these slackers. This is Survivor, ladies and gentlemen. If you start to give up, it’s only a matter of time before Jeff Probst tells you that the tribe has spoken and that you need to go. Force yourself to sweat and feel pain for the entire year, else you will be like every other February Failure lined up under the welcoming beacon of the Golden Arches, getting ready to drown their sorrows with an extra-large soda for just a dollar. 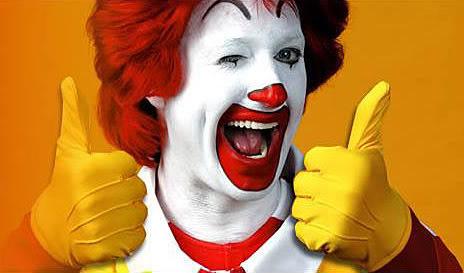 Replacing training with trans-fats since ‘63

Well, that’s all I have for you guys. Follow the five steps I have laid out here and go forth into the realm of sweat and self-loathing, for you shall come out a stronger person. You can do anything you set your mind to, pain is weakness leaving the body, the early bird gets the worm, there are plenty of other fish in the sea, inspiration, inspiration. So here’s to a New Year and to a New You. Go out there and make the best of both.