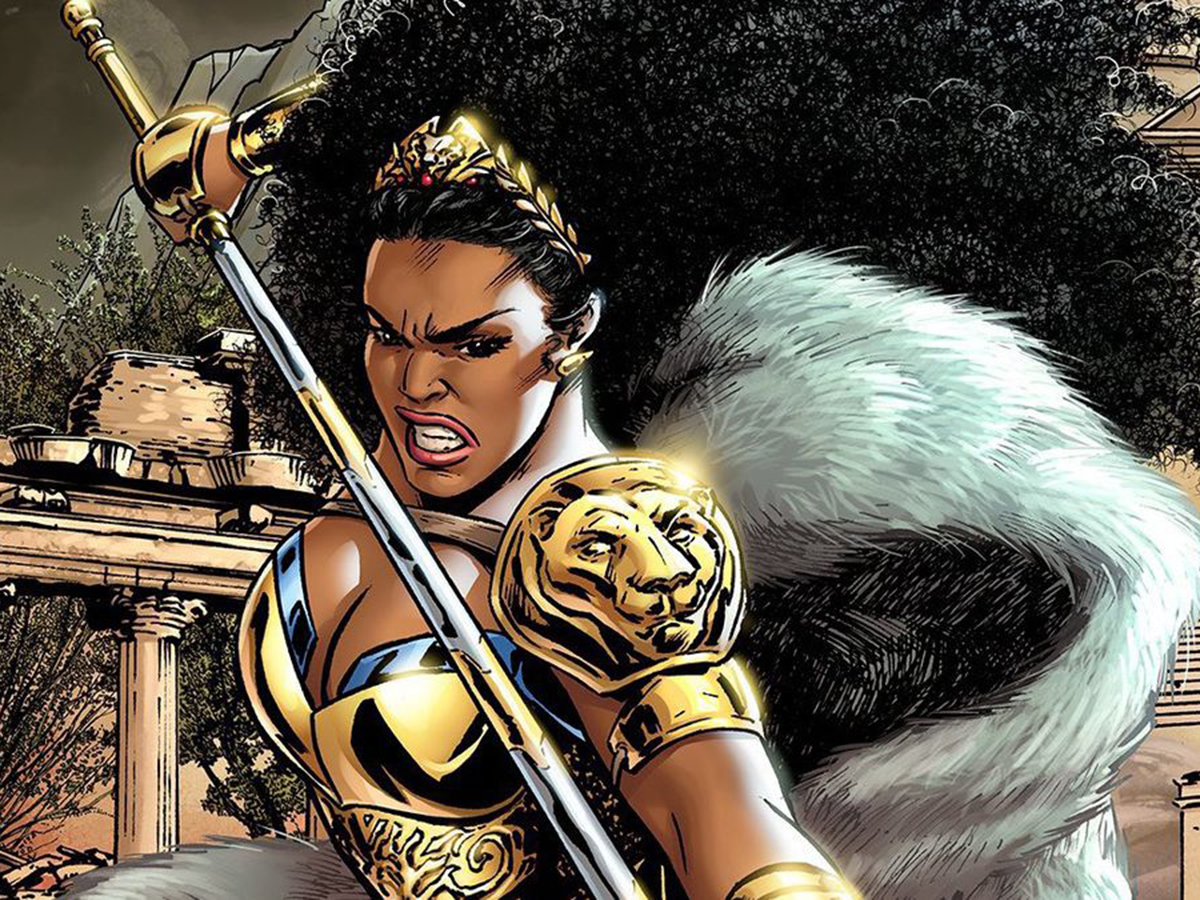 Popular comic book publisher DC Comics recently published the first issue of a new six-issue comic book series for one of its own forgotten and little-known Black female characters called “Nubia & The Amazons.” The series reintroduces and will focus on the story of the title-character Nubia, known as Wonder Woman’s Black twin sister in older publications, for the current generation of audiences.

Nubia’s origins date as far back as 1973, when DC Comics’ Robert Kanigher and Don Heck created her as a powerful and initially mysterious dark-skinned Amazonian from a distant island. She was introduced as a character possessing a level of strength equal to Diana and as a challenger to the title of “Wonder Woman.” In later comics within the same continuity, Diana’s mother, Queen Hippolyta revealed to Diana that Nubia is her long-lost twin sister formed from clay. Nubia is often considered the first Black female character that DC Comics had ever published. However, some sources dispute that claim and instead credit the character, Bumblebee, from “Teen Titans” who debuted at a later time in the 1970s as the first. Whoever’s the first doesn’t really matter, but it’s surprising nonetheless that it took so long for a Black woman to be written into a comic book for DC, as the company had been in existence since the 1930s. Nubia’s initial comic book debut in “Wonder Woman” Volume 1, Issue 204 was a groundbreaking moment in DC’s history that undoubtedly influenced the inclusion of future comic book characters from diverse backgrounds.

Since her initial debut, Nubia has only appeared sparingly throughout the years in all of DC’s creative properties. Her original background story as Queen Hippolyta’s daughter and Wonder Woman’s twin sister had also been retconned several times in other future publications by DC. In one instance, writers changed her name to “Nu’Bia,” and she became just a fellow Themyscrian Amazon with no deeper familial connection to Wonder Woman, among other differences. Curiously, she’s primarily appeared only as a small side character to the bigger names in the DC universe, which is surprising considering that she was originally written as the twin sister and true equal to one of the most popular superheroes in this universe. However, fans of this lesser-known character continued to express interest and maintained hope that DC would use her in future publications and in other media.

It can be argued that because of the recent mainstream success of Black comic book characters, such as Marvel’s Black Panther, Luke Cage, Miles Morales and others, combined with a more progressive American culture that desires more diverse storytelling, DC thought it’d be a good idea to reintroduce such a powerful figure from their own comic book universe in an effort to capture new audiences, trying to capitalize on the ongoing trend to make more money. That’s a capitalistic view, but hopefully there were mostly good intentions behind the decision to bring Nubia back. Unquestionably, genuine fans played a considerable part in making this new mini, six-issue series happen in the first place. Some of the credit also goes to young adult literature writer, L.L. McKinney and her recent graphic novel, “Nubia: Real One,” which DC published in February 2020. As a fan of the character herself, she pitched the idea of a new story involving a teenaged Nubia in a contemporary setting where she struggles with her Amazonian gifts to DC, and they greenlit the project. The success of McKinney’s graphic novel was a breakthrough for the character Nubia, as what came next is where we are now: her first DC-published, solo-comic series.

The two authors and leading creative minds behind this newest iteration of Nubia are Black writers, Ayala Vita and Stephanie Williams. Both have an extensive history within the comic book space and have written previously for DC Comics. Vita’s co-written issues of “Batman,” “Supergirl,” “Suicide Squad,” “Static Shock” and several others. Ayala Vita has also been a writer on several Marvel comic books, such as “X-Men,” “Shuri” and “2020 Ironheart.” Williams co-wrote “Wonder Woman Black and Gold #2” and has also written a short-story for Marvel centered on Monica Rambeau in “Voices: Legacy.” She currently has three successful ongoing webcomics as well. Joining Vita and Williams in this project as the artist of the comic series is Black comic artist, Alitha Martinez. Like the authors, Martinez has a deep background of creative work within the comic book medium and is very talented. She’s worked as an artist for all of the major comic book publishers, including DC and Marvel. A few of the popular comic books she’s worked on are “Iron Man,” “Black Panther,” “X-Men” and “Batgirl.” The three of these incredibly talented Black creatives being at the helm of the official reboot of a forgotten Black female character is both inspiring and exciting.

The first issue of “Nubia and the Amazons” is a shorter read, but it’s of high quality. The story begins with Nubia recounting her arrival on the Amazonian island nation of Themyscira through the Well of Souls. In her former life, she was born in the world of “man”, but when unknown events put an end to that life, she was reborn as an Amazonian at the same time Diana was born. Magala the Keeper of the Well, is the first to introduce Nubia to her new environment and remains a close friend even after Nubia eventually succeeds Hippolyta as the new Queen of Themyscira. Centuries after Nubia emerged from the Well herself, five new women appear, which shocks her. Philippus, the aide to the Queen, picks up on her concern and recommends appointing a new guardian of Doom’s Doorway, a rift that protects the island from the evil of Hades. The comic concludes with a strange vision that seems to predict a future disaster on Themyscira, leaving readers with a mystery. The storytelling for the first issue is interesting and moves at a steady pace. The illustrations are amazing, and the colors are rich and tonally dark, which works really well for this comic. Nubia’s character design is excellent, she’s depicted as regal, powerful, strong and beautiful with big curly hair. Existing fans should be pleased with this first issue, and newer audiences exposed to Nubia for the first time are likely to enjoy her new introduction, too.

Verdict: Nubia’s debut in her first stand-alone comic book series is an interesting short read that provides a fresh-look for a long neglected DC character. Headed by three amazingly talented Black comic book creatives, the future of Nubia appears to be in good hands.