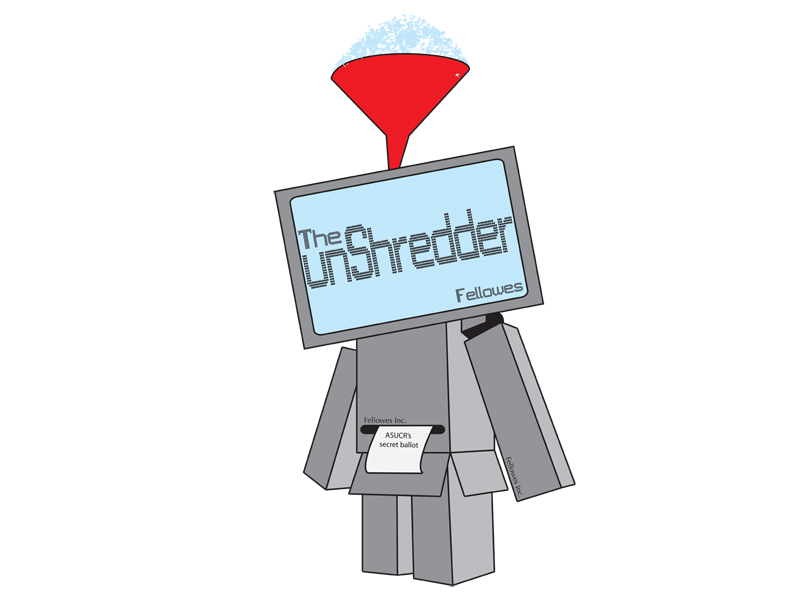 Thanks to the newly-developed Fellowes Unshredder, the destroyed paper ballots were able to be recovered and shared with the campus community.

The shredded ballots were discovered when third-year engineering student Melissa Weymouth was called into the ASUCR office in the HUB 2.0 to repair a cleaning bot. As she worked on the machine, she discovered the bot had retrieved a garbage bag full of aged shreds of paper.

“I hadn’t seen paper in a very, very long time, so I figured I’d give BCOE’s new Unshredder a whirl and see what I’d find,” said Weymouth.

It turns out the garbage bag had been left in a desk drawer, undiscovered until the bot did its extensive spring cleaning of the office.

“It’s great that these votes are finally out into the public, but it’s 100 years too late,” said student Philip Cooksey. “My great-great-grandmother would have loved to have known how the senators voted before the 2013 spring elections. She couldn’t make an informed decision, so she didn’t vote at all. No one did.”

Because of the lack of adequate information on senators’ voting history, and an all-time low approval rating, voter turnout for the spring 2013 elections suffered. As a result, ASUCR failed to reach the necessary 20 percent of student population voting to validate their elections.

The student government held several subsequent elections, offering bigger and bigger incentives for getting out the vote, at one point even holding a raffle for an all-expenses-paid trip to the Bahamas. The Senate Chambers sat empty for months before they reached the minimum level of participation to establish a government.

“Students figured, for a while at least, that having no senate was just as good or better than having a senate that wasn’t honest with them,” said Political Science Professor Kathryn Llanos.

Although the senate was finally able to convene in the chambers and form a government, no incumbents were reelected. The aftermath of the destroyed ballots seemingly doomed their chances of regaining their seats.

A new version of the ASUCR Constitution was quickly passed by the senate, which voluntarily made the guidelines compliant with the Brown Act—California’s government transparency law. Ever since, voter turnout has swelled to nearly 70 percent, with even higher participation predicted for next week’s elections.

ASUCR isn’t the only government to have been graced by the Unshredder. Even the United States federal government has put the new product to use.

Despite the eradication of paper products in 2060, many important historical documents remain unavailable digitally because they had been previously destroyed. The Unshredder has already allowed historians to retrieve valuable information regarding government cover-ups, most notably during the presidency of John F. Kennedy. The long-rumored involvement of the CIA and Cuba in the assassination of the 35th President of the United States was confirmed last month in news that rocked the whole country.