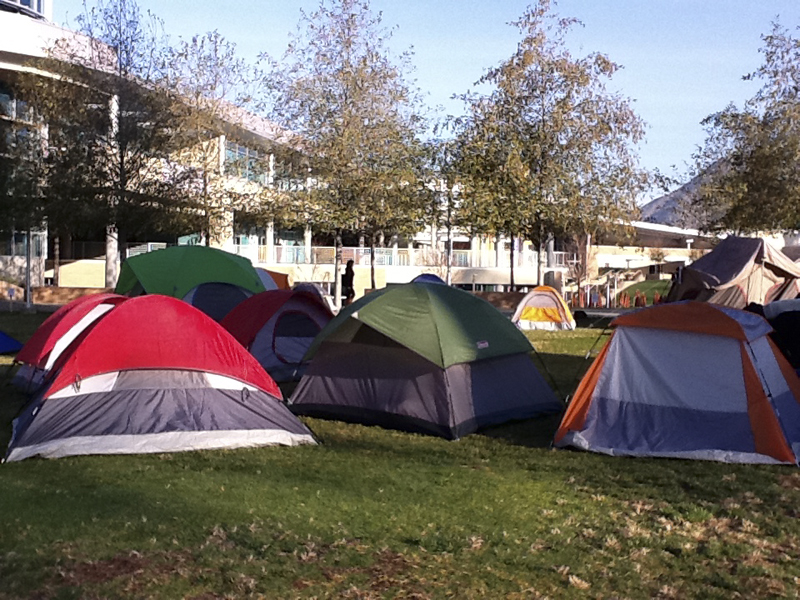 Thousands of students have set up tents around the Student Services Building in hopes of gaining further financial assistance for paying off their high tuition fees. With lines wrapping around the Highlander Union Building (HUB), many students have embraced the week-long delays, despite facing heat exhaustion and encroaching line-cutters.

“These costs are truly outrageous and we as a community at UCR must seek out ways to lower tuition costs, but also clear out the growing number of students camping in front of our Student Services Building,” states English Professor Dr. John Brackelberry. His classroom is located in Watkins Hall, where he often saw rows of tents from across the field.

UCR is known as one of the most prestigious institutions in the universe, yet its annual tuition rates have doubled from $175,000 to $350,000 since 2110, and they are expected to reach $500,000 this year. Students from the Humanities, Arts and Social Sciences Liberal Education (HASSLE) often receive less financial aid due to limited resources and reduced access to select majors classes.

The camping has also led to an increase in mini-robot fighting between students waiting in line. Victors are given one spot ahead in line, while losers must go to the back. This type of combat fighting is legal in 24 states, including California, Hawaii and Nevada.

“My mini-robot short-circuited the other day, so I haven’t been able to move up in line,” said first-year ethnic studies major Jim Brady. “But overall, I think the lines have become a highly publicized and prized feature on our campus.”

Student tents may now be found on Google Intergalactic Earth.

Hoverboard theft on the rise

In reaction to the recent spree of hoverboard thefts outside residence halls, the UCR administration has established undergraduate grants for innovative technologies geared toward improving campus safety. “This is the worst crime spike in decades, with nearly 350 hoverboards being reported as stolen,” according to UCPD officer John Travolini.

“The grant aims to encourage intellectual minds to think of creative new solutions to a collective problem,” said George Phomun, vice chancellor of campus safety and sole organizer of the grant. “If students do not feel safe on campus, then action needs to be taken.” Grant money ranges between $5,000 to $10,000 and the allocated amount will be determined on a case-to-case basis.

Even with recent efforts to combat rising criminal activity, students such as second-year biology major Khalea Bluepop expressed concerns over campus safety. “I stopped bringing my hoverboard to campus altogether. I’d rather walk to school than sit in my classes worried if someone is going to cut the lock off my hoverboard and steal it for their own selfish means,” said Bluepop.