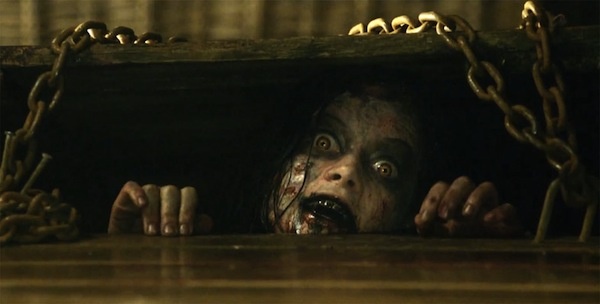 In 1981, Sam Raimi’s “The Evil Dead” upped the gore to a ridiculous level for its Reagan-era audience. The film has since become a cult classic due to the stamp that Raimi’s creative filmmaking left on the movie world. Unfortunately, like many remakes, the newest version is another let down for avid fans of the originally unpopular series and moviegoers everywhere.

“Evil Dead” (no “The”) loosely follows the same moronic plot as the original, but naturally amps up the carnage for modern day desensitized viewers. The film has been tagged with the line, “The scariest film you will ever see,” and although I cannot decide if the phrase is a marketing ploy or some kind of subtle tease, I can tell readers right now that there will be more reasons to cringe than to check under the bed when they return home that night.

Younger Bruce Campbell lookalike Shiloh Fernandez plays David, a teen who kind of wants to help his drug addict of a sister through recovery. I say “kind of” because the acting and writing are nowhere near good enough to make it seem like David is desperate to fight for his sister’s sobriety. Of course, this is hardly the point of the film; it is merely a reason shoveled to audiences to explain why five idiotic friends traverse into the wilderness, much like many teens have done throughout the years (remember “The Cabin in the Woods?”), to the most secluded and run-down little shack they can find. At least “The Evil Dead” gave fans a better reason: “Why are we getting [this cabin] so cheap?” asks Linda, an eager vacationing teen.

The movie does not hesitate to push through the bad acting of its cast––including Eric, a wannabe Kurt Cobain played by Lou Taylor Pucci––in order to jump right into the blood, which literally floods the screen. At least the demonic possessions are a direct result of Eric’s decision to read aloud from a barbed wire-bounded book, which he found in a basement full of hanging cat carcassess. You would figure that would be the time to leave.

Since Eric does not know how to read to himself, the possessions begin immediately and are jump-started by a cruel plant-based rape scene. Junky Mia, played by the aggressive Jane Levy, is the first to enter a demonic transformation and initiate attacks against her once beloved friends. Nothing stops this demon from hell…except for a bolt lock on a cellar door.

When the teens do finally decide to leave, there is a convenient Old Testament-style rain storm blocking the exit road. By that time, it is much too late for the inevitably doomed group of teens. One by one, the possessions bounce from one character to the next and this gives director Fede Alvarez a chance to showcase some very impressive special effects and makeup. However, that is really the only credit I can give to this picture because everything else does not work, much like it did not work in the original. In contrast, Raimi gave his film a faint scent of humor through character quips and his intention for the overuse of violence and blood to be a comment on a “Bible Belt” America.

Without any of the stylistic benefits the first film received from Raimi or any real scares, “Evil Dead” suffers on screen and will ultimately be thrown into a box with all the other discarded horror remakes. Perhaps some viewers want to pay for the endless amount of gore or watching my main men David and Eric get pummeled with a crowbar 17 times in the face, but I feel like I should have asked for my money back.

After witnessing the blood-infested film that is “Evil Dead,” I can only hope that Alvarez stays clear of the remake route and decides to pursue something original, and something that is not a horror flick. There have been many cabins and many woods through which a multitude of sex- and drug-crazed teenagers have hiked through, and even though one of those kids survives bloodied, battered and traumatized, each of these films never has anything to say besides, “Look how much this blood makes you squirm.”